ISLAMABAD, Pakistan -- A CIA drone strike earlier this week just missed the head of the Taliban in Pakistan, killing at least 65 people at a funeral he attended and damaging his personal car, according to a resident and a Pakistani intelligent agent in the area. 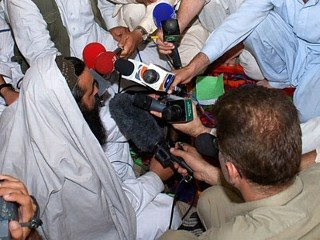 The strike's target was Baitullah Mehsud, who Pakistan has blamed for the death of former Prime Minister Benazir Bhutto and dozens of other attacks across the country. Pakistan is currently preparing for a war against Mehsud in the rugged South Waziristan tribal district, and the CIA has increased its attempts to kill him in the past 6 months.

U.S. intelligence officials say they believe Mehsud is "still among the living." But this appears to be the closest that a drone strike has come to killing Mehsud. He was attended the Tuesday funeral prayer, which lasts no more than a minute and a half, the resident of the area said. 2 missiles struck right after the prayer was finished as most of the mourners were leaving the open-air funeral.

Mehsud was in that group of mourners, but the missile appears to have hit a relatively small area where Mehsud was not standing.

"Only if it had landed 15-20 seconds before, it would have hit a lot more people and maybe" Mehsud himself, the resident said. Mehsud had not left the village, Zangara, and his car was close enough to the explosion site that it was damaged, the resident said.

A Taliban commander named Sangin, who was close to Mehsud, was killed in the strike, the intelligence agent and the resident said.