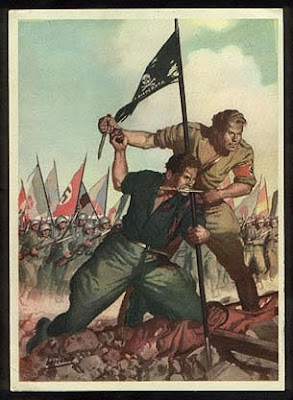 Italy has sanctioned the creation of vigilante patrols for the first time since Mussolini's notorious Blackshirt volunteer militia.

A new law gives an official stamp of approval to vigilante groups that have sprung up in several Italian cities, especially in the northern strongholds of the right wing, anti-immigrant Northern League.

The vigilantes can alert police to public order offences or suspected criminals but don't have the power of arrest.

One group, known as the Italian National Guard, claims to have 2,000 members. It plans to dress its members in khaki shirts, black ties and black armbands bearing a red symbol that critics say resembles a swastika.

The opposition Democratic Party warned that such groups set a dangerous precedent and harked back to Italy's fascist past.

"There was a period in Italy's history in which security was entrusted to people who went around in shirts of the same colour and we don't want to return to that," its leader, Dario Franceschini, warned.

The accusation prompted an angry response from the government, which said the vigilante patrols were a legitimate means of combating crime.

The law was part of a sweeping security package passed by parliament in response to widespread concerns about crime and immigration. It makes illegal entry or residence on Italian soil an offence punishable by fines of up to €10,000.

Laurens Jolles, the UNHCR's representative in Italy, met Mr Maroni to complain about the deportation of migrants intercepted at sea, which began earlier this month amid steadily warming ties with Libya.

Mr Jolles said after the meeting that such repatriations contradicted the 1951 Geneva Convention, which was applicable even in international waters.

The UNHCR says the hundreds of people deported in recent weeks included asylum seekers and it called on Italy to accept them back.

"The repatriations will go ahead, as foreseen in the agreement between Libya and Italy," Mr Maroni said after the interview.

That is almost funny it's so blatant...brown uniforms with armbands?!?

This is just the beginning - every Western nation seems to be recruiting citizens to form Stasi spy units and enforcers for the state, and it isn't just for fun or to 'help build communities', methinks.