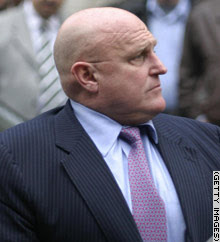 ISLAMABAD: Former prime minister Benazir Bhutto’s offer to the world community to allow its investigators to probe Dr AQ Khan once she returns to power in 2007, might produce terrible results for several former generals of Pakistan Army who were allegedly part of the infamous proliferation network of AQ Khan but were conveniently let off the hook as part of a secret deal between General Pervez Musharraf and Richard Armitage in 2004.

Dr AQ Khan is on record having said that all the top army generals since 1985 knew about the proliferation activities of his network. However, he could never find an opportunity to give to the media or the judiciary the names of the generals who were part of his network once he was put under house arrest by his captors.

When contacted, Farhatullah Babar, the personal spokesman of Ms Bhutto, told The News that there was no doubt that if the PPP returns to power, its government will definitely form a parliamentary committee to probe the whole issue of nuclear proliferation. He said during the last three years, on the instructions of Ms Bhutto, the PPP parliamentarians had been demanding on the floor of the house comprehensive investigations into the activities of the Khan network and if the PPP formed its government, it would definitely order investigations.

When asked whether or not it would lead to revelation of names of military generals who were part of this proliferation network, Mr Babar put a counter question: Why on earth should there be no investigation into this vital issue of national security?

Babar said that all need to understand that it’s a very serious security matter for a country like Pakistan. He said that the matter must be probed for the sake of Pakistan and its security, which was undermined by the activities of this network. This correspondent tried to contact Rashid Qureshi, the spokesman of President Musharraf, but he did not attend his cell phone.

Earlier, a book on Pakistan’s nuclear programme launched in London on September 13 had revealed that General Musharraf had agreed to arrest Dr AQ Khan only after striking a secret deal with the US Deputy Secretary of State Richard Armitage in 2004 that his own army generals involved in the illegal nuclear trade would not be touched and most importantly, that he himself would be accepted by the Americans to rule Pakistan in his military uniform.

After this secret deal, the role of Pakistani generals in nuclear proliferation was ignored by the Americans and they focused on AQ Khan alone who was made a scapegoat in the name of “national security interests.”

A nuclear dossier on AQ Khan network launched in the UK this year had claimed that Dr AQ Khan was put under detention after he threatened the former ISI chief General Ehasanul Haq that he would tell the names of all the military generals who were part of this network if he was touched by the Musharraf government. Before he could implement his threat, he was arrested and put under house arrest without any access to the media and the courts. The same dossier had revealed that Dr AQ Khan had told his investigators that all the chiefs of Pakistan Army since 1985 knew about the activities of his illegal network.

One official source told The News that Benazir’s step might provide Dr Khan an opportunity to give his side of the story and defend himself, something that was denied to him since 2004, when the scam surfaced.

It is said that certain tall promises were made with Dr Khan at the time of forcing him to accept the responsibility. But, once he was dumped, no one remembered those promises. Islamabad-based lawyer Tariq Khokhar who was believed to be working on the petition to move the Supreme Court too had told The News last week that certain promises were made with the detained scientist, which were never fulfilled.

Earlier, a new book “Deception: Pakistan, the United States and the Secret Trade in Nuclear Weapons: Pakistan nuclear Programme” co-authored by Adrian Levy and Catherine Scott-Clark, claimed that Pakistan was still busy selling its nuclear secrets in the world market, and that Musharraf knew about these secret deals by this officially banned network of AQ Khan. The book had claimed that during the Musharraf-Armitage meeting in Islamabad in 2004, it was agreed that AQ Khan and his aides would be arrested and charged with “privately” engaging in proliferation. The country’s military elite – who had sponsored Khan’s work and encouraged sales of technology to reduce their reliance on the American aid – was left untouched.
Posted by Alex Constantine at 12:52 AM