Robert Fisk: Do you know the truth about Lockerbie? 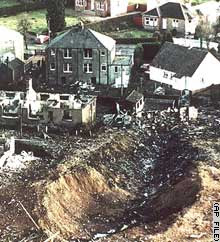 Is Fisk joshing? Much-abused "conspiracy" researchers were reporting the facts about Flight 103 years ago, when Fisk's brethren in the media were blaming Ghadaffi, who was subsequently blackmailed, plied with the threat of continued sanctions, into accepting responsibility for the terrorist strike - once the sanctions were off, the Libyan leader retracted his "confession."

We researchers knew that Syrians in the employ of the CIA/NSC bombed the flight. We said so all along. Now Fisk wants anyone with knowledge of the crash to "come forward." We did that years ago, when something might have been done about it. Get off it, Fisk.

Robert Fisk: Do you know the truth about Lockerbie? - I urge anyone who is aware of government lies over Flight 103 to come forward

After writing about the "ravers" who regularly turn up at lectures to claim that President Bush/the CIA/the Pentagon/Mossad etc perpetrated the crimes against humanity of 11 September, I received a letter this week from Marion Irvine, who feared that members of her family run the risk of being just such "ravers" and "voices heard in the wilderness". Far from it.

For Mrs Irvine was writing about Lockerbie, and, like her, I believe there are many dark and sinister corners to this atrocity. I'm not at all certain that the CIA did not have a scam drugs heist on board and I am not at all sure that the diminutive Libyan agent Megrahi – ultimately convicted on the evidence of the memory of a Maltese tailor – really arranged to plant the bomb on board Pan Am Flight 103 in December 1988.

But I take Mrs Irvine's letter doubly seriously because her brother, Bill Cadman, was on board 103 and died in the night over Lockerbie 19 years ago. He was a sound engineer in London and Paris, travelling with his girlfriend Sophie – who, of course, was also killed – to spend Christmas with Sophie's aunt in the United States. Nothing, therefore, could be more eloquent than Mrs Irvine's own letter, which I must quote to you. She strongly doubts, she says, Libya's involvement in the bombing.

"We have felt since the first days in December 1988," she writes, "that something was being hidden from us ... the discrediting of the Helsinki (US embassy) warning, the presence of the CIA on Scottish soil before the work of identifying bodies was properly undertaken, the Teflon behaviour of ministers and government all contributed to a deep feeling of unease.

"This reached a peak when my father was told by a member of the American Presidential Commission on Aviation Security and Terrorism that our government knew what had happened but that the truth would not come out. In the truth vacuum, the worst-case scenario – that lives were sacrificed in expiation for the Iranian lives lost in June 1988 – takes on a certain degree of credibility. The plane was brought down in the last dangerous moments of the Reagan presidency."

Now I should explain here that the Iranian lives to which Mrs Irvine refers were the Iranian passengers of an Airbus civilian airliner shot down over the Gulf by a US warship a few months before Lockerbie and before the end of the eight-year Iran-Iraq war.

The USS Vincennes – nicknamed Robocruiser by the crews of other American vessels – blasted its missiles at the Airbus on the assumption that it was a diving Iranian air force jet. It wasn't – and the Airbus was climbing – but Reagan, after a few cursory apologies, blamed Iran for the slaughter, because it had refused to accept a UN ceasefire in the war with Iraq in which we were backing our old friend Saddam Hussein (yes, the same!).

The US navy also awarded medals – god spare us – to the captain of the Vincennes and to his gunnery crew. Some weeks later the boss of the Popular Front for the Liberation of Palestine General Command – a pro-Iranian Palestinian outfit in Lebanon – suddenly called a press conference in Beirut to deny to astonished reporters that he was involved in Lockerbie.

Why? Was he being fingered? Was Iran? Only later did those familiar "official sources" who had initially pointed the finger at Iran start blaming Libya. By then we needed the support of Iran's ally Syria and Iranian quiescence in our attempt to liberate Kuwait after Saddam's 1990 invasion. Personally, I always thought that Lockerbie was revenge for the Airbus destruction – the PLP's strange press conference lends credence to this – which makes sense of Mrs Irvine's courageous letter.

Her parents, Martin and Rita Cadman, have, she says, had countless meetings with MPs, including Tam Dalyell and Henry Bellingham, Cecil Parkinson, Robin Cook and Tony Blair, and with Nelson Mandela (whose appeal for Megrahi to be transferred to a Libyan prison was supported by the Cadmans).

In a poignant sentence, Mrs Irvine adds that her parents "are ageing and in their anxiety that they will die with no one having taken real responsibility for their son's death are in danger of losing focus and feeling that they themselves are 'raving'. The (1980-88) war in Iraq meant that no lessons were being learned, and because my brother chanced to be on that plane we all now feel a heightened sense of responsibility for the world situation".

Then Mrs Irvine comes to the point. "What can we do? Now that my father is older and it is up to us, the next generation, to try to needle the government, but is there any hope? I am writing to ask if you think there is any reasonable action that we can take that has a slight prospect of success ... a refusal to understand and admit to the past is dangerous for the future."

I couldn't put it better myself – and I do have a very direct idea. If official untruths were told about Lockerbie – if skulduggery was covered up by the British and US governments and lies were told by those responsible for our security – then many in authority know about this.

I urge all those who may know of any such lies to write to me (snail mail or hand-delivered) at The Independent. They can address their letters to Mrs Irvine in an envelope with my name on it. In other words, this is an appeal for honest whistle-blowers to tell the truth.

So I await news. Ravers need not apply. But those who know truths which cannot be told can have the honour of revealing them all. It's the least Martin and Rita Cadman and Mrs Irvine – and Bill and Sophie – deserve. As for a constabulary which just might be tempted to threaten me – or Mrs Irvine – in a quest for truth, to hell with them.