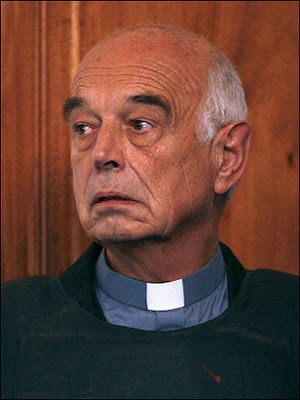 LA PLATA, Argentina — A Catholic priest accused in a series of deaths and kidnappings during Argentina's Dirty War was convicted and sentenced to life in prison Tuesday Former police chaplain Christian von Wernich was found guilty of being a “co-participant” with police in seven homicides, 31 torture cases and 42 kidnappings, ending a trial that has focused attention on the church during the 1976-83 military rule.

Hundreds of people beat drums and set off fireworks outside the federal courthouse after the verdict was announced. Dozens of spectators cheered inside the packed courtroom including headscarved members of rights
group the Mothers of the Plaza de Mayo, who for the last 30 years have been seeking to learn the fate of sons and daughters who disappeared during a crackdown on dissent. “At last, at last! My God, it's a conviction!” said Tati Almeyda, of the Mothers of the Plaza de Mayo. “We never thought we'd see this day. Justice has been served.”

Mr. Von Wernich earlier in the day professed his innocence: “False testimony is of the devil because he is responsible for malice and is the father of evil and lies.”

On Monday a prosecutor recommended a life prison sentence for Mr. von Wernich, 69, saying the priest had been linked by survivors to at least five clandestine detention camps in Buenos Aires province.

“Do people really understand what a clandestine torture centre was? Do people know all the terror that went on in those places?” prosecutor Carlos Dulau said.

During months of trial, more than 70 witnesses testified and judges toured former torture centres at police stations with survivors. The dirty war officially left some 13,000 dead or missing, although human rights groups have put the toll at nearly 30,000.

Defence lawyer Juan Martin Cerolini argued Tuesday that Mr. von Wernich as a priest was obliged to visit police detention centres as part of his duties. But Mr. Cerolini insisted that role did not mean Mr. von Wernich had any
part in a state crackdown.

Mr. Cerolini rejected survivor testimony suggesting Mr. von Wernich — who has worn a bulletproof vest over his clerical collar during the trial — conspired with police to help extract information from prisoners subject to
torture under the guise of giving them spiritual assistance.

“Von Wernich never kidnapped, tortured or killed anyone,” Mr. Cerolini said. He charged that the trial was unjust and that the government is failing to prosecute “terrorist acts” committed by former leftist rebels against state
security forces.

Mr. von Wernich said in his last words to the judges that he never violated the priestly prohibition against revealing information obtained in the Roman Catholic sacrament of confession.

“No priest of the Catholic church ... has ever violated this sacrament,” he said.

Argentina's Catholic Church, which withheld comment during the months of trial, said on its Web site that it was “moved by the pain” brought about by the priest's conviction for what constituted “serious crimes.”

“We believe the steps taken by the justice system in clarifying events (of the past) should serve us to renew the forces of all citizens on the path to reconciliation,” said the statement, which urged Argentines to put away “hate and rancour.”

The statement did not address public criticism surrounding the trial that the church failed to vigorously defend human rights during the dictatorship.

However, defenders of the church over the years have rejected such charges, saying several priests and nuns were among those killed during the junta years.

Activists said they hoped Mr. von Wernich's conviction would encourage other courts to move forward with pending cases against scores of other former security agents.

Critics say the disappearance of a key witness during last year's trial of former police chief Miguel Etchecolatz has had a chilling effect on efforts to prosecute those cases. Mr. Etchecolatz was convicted in September 2006 in
the same La Plata courthouse.

The trials came after the Supreme Court in 2005 annulled a pair of 1980s amnesty laws blocking prosecution of scores of former state security agents or their civilian allies.