Book Review: The Art of Political Murder - Who Killed the Bishop? 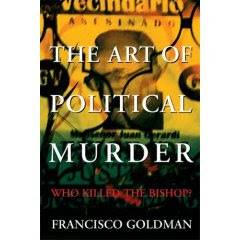 Book in a nutshell: Guatemala. 1998. Bishop Juan Gerardi Conedera, an outspoken critic of the government's history of human rights abuses, is beaten to death inside his church parish house. The murder occurs two days after Gerardi publishes a report documenting Guatemalan military abuses since the 1960s, and the timing of his murder suggests that it was government retaliation.

Novelist Goldman's The Art of Political Murder: Who Killed the Bishop?, his first work of nonfiction, documents the controversial and perilous investigation following Bishop Gerardi's murder - no easy task, as more than a dozen people connected to the case were murdered throughout the investigation. The end result, though, is a sliver of justice that - hopefully - sets the foundation for future human rights progress in Guatemala.

In capturing the nuances of this investigation, Goldman (who has familial ties to Guatemala) has penned an exhaustive tome covering all angles of the case down to the finest detail, even identifying the brand of dog food being fed to an imprisoned German shepherd implicated in the murder. (Yes, a dog was initially implicated in the murder!)

Best tidbit: "The more shocking the crime, it seemed, the more powerful or powerfully connected the criminals, and in Latin America powerful people almost never end up in prison."

Pros: Goldman is like a paleontologist reconstructing a T. Rex from a small handful of fossils, including a few bones tossed in as red herrings. His access to inside information, garnered at great personal risk, provides a thorough account of one of Guatemala's most infamous murders.

Cons: Early on, Goldman throws numerous characters and heavy doses of Guatemalan history at the reader. While this provides excellent cultural context, it's difficult to keep track of all the characters at first, and the back stories and historical asides often come at the expense of the narrative flow.

Final word: Goldman is a journalist's journalist, and the amount of investigative legwork involved in producing this book, and the risks thereof, is staggering. This is an impressive book in its breadth, but it may be a bit daunting in detail for a mass audience.
Posted by Alex Constantine at 8:49 PM