Corporate America and the Rise of Hitler 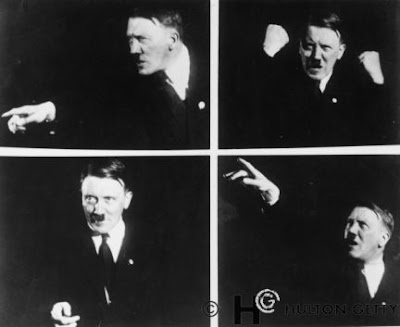 The hidden History of World War II
Part I: Corporate America and the Rise of Hitler
By Bill Doares

May 8 is the 50th anniversary of the defeat of Nazi Germany in World War II. United States President Bill Clinton, German Chancellor Helmut Kohl and Russian President Boris Yeltsin will gather in Moscow to commemorate that event.

Between 1933 and 1945, Hitler's Nazi regime conquered most of Europe and North Africa. It unleashed a war that took over 50 million lives. It forced tens of millions of people into slavery. And it carried out the biggest mass murder campaign of the 20th century. Six million Jewish people, half a million Romany and Signi people, and millions of Slavic people were poisoned in gas chambers, shot, deliberately starved or tortured to death in fiendish »scientific« experiments. Hundreds of thousands of disabled people, gay people and Communists, socialists and other anti-Nazis--many of them German--were also murdered by Hitler. These crimes were carried out in the name of »Nordic racial purity.«

The nightmare came to an end on April 30, 1945. Hitler blew his brains out as victorious Soviet troops closed in on his underground bunker in Berlin. His closest ally, Italian Fascist dictator Benito Mussolini, had been executed by Italian Communist fighters a day earlier. On May 9 the Nazi armies surrendered. Clinton, Kohl and Yeltsin are sure to recount all this on the anniversary. They will say the horrors must never happen again. But it will all be hypocrisy. They will conceal the class character of World War II. They won't say that Hitler and the Third Reich were creations of the capitalist profit system. They won't say that the millions of Soviet soldiers who gave their lives to defeat the Nazi war machine were fighting under the red flag of socialism. And they won't denounce the giant banks and corporations that financed fascism and profited from the Holocaust it unleashed.

Hitler was made Germany's chancellor in 1933, at the height of the global crisis of capitalist overproduction known as the Great Depression. In Germany, one out of every three workers was unemployed. In the 1932 elections 13 million Germans had voted for Socialist or Communist candidates. Germany's wealthiest capitalists--the Krupps, Thyssens, Kirkdorfs, etc.--had funded the Nazi Party for nearly a decade. Now they wanted it in power.

On Jan. 3, 1933, Hitler was summoned to a meeting at the home of Reinhard Shroeder, a wealthy German banker, and asked to form a government. Within a year he was proclaimed fuehrer--absolute leader. Mussolini's Fascist Party had come to power in a similar fashion 11 years earlier. Germany and Italy weren't the only countries where big corporations financed fascist and racist movements during the Depression. In the United States half a dozen corporate magnates sat on the board of the pro-Hitler America First Committee.

In 1934, the Du Ponts and Morgans tried to hire former Marine Gen. Smedley Butler to stage a fascist coup against the liberal Roosevelt administration. Butler told Roosevelt, and the plan fizzled. Gen. Douglas MacArthur was named in the plot. There was a Senate investigation. But it is a measure of the power of big business that no one was ever prosecuted.

The social crisis in Germany was deeper than in the U.S. and other capitalist countries. Germany was Europe's most industrialized country. But it had been defeated in World War I. Britain had seized its African colonies, and with France had carved up its »spheres of influence« in the Middle East, eastern Europe and China. British and French monopolies were raking in profits from the unpaid labor of millions of miners, plantation workers, oil workers and railway builders in Africa, Asia, the Middle East and eastern Europe. U.S. capital was expanding in Latin American and Asian countries, often behind Marine Corps bayonets. World War I had put all of Europe in Wall Street's debt. But German bankers and business owners had only the surplus value produced by Germany's own workers at their disposal. And much of that had to be forked over to their rivals as »war reparations.«

The carnage of World War I, which killed 20 million people, had unleashed a revolutionary upsurge in Europe. It began in Russia in 1917, with the world's first socialist revolution. In 1919 the German working class rose in insurrection. The revolution was betrayed and defeated--but it scared the capitalists into making concessions. German workers won the eight-hour day, unemployment insurance and other rights in 1919. In the 1930s, U.S., British and French corporations and their governments felt they could give concessions to labor and still make money. But Germany's capitalists saw only one way to reverse their declining fortunes--war.

War against the working class at home, and war abroad in pursuit of new colonies and cheap labor. That was Hitler's job. Hitler's first acts were to smash the unions and the Communist and Socialist Parties. The right to strike and collective bargaining were abolished, and wages fell. The Hitler regime also launched a massive military buildup. And it opened a vicious anti-Jewish campaign to confuse, divide and misguide the people, especially the frustrated middle class. Corporate profits soared.

Not only German capitalists hailed Hitler. Big U.S. corporations like Ford, General Motors, General Electric, Standard Oil, Texaco, International Harvester, ITT and IBM, had invested $1.5 billion in Germany during the 1920s. Their owners were as eager as their German counterparts to see the labor movement and working-class parties smashed in Germany. And they wanted to profit off the Nazi military buildup. Most of these companies continued to operate in Germany during the war--and many used concentration-camp slave labor. Henry and Edsel Ford, Irenee du Pont, GM bosses James Mooney, William Knudsen and Alfred Sloan, Charles Wilson and Philip Reed of General Electric, IBM founder James Watson, Standard Oil's Walter Teagle and James Farish, ITT's Sosthenes Behn, oil billionaire J. Paul Getty and Kennedy family patriarch Joseph Kennedy were among the many U.S. »captains of industry« who openly supported Hitler. So did James Forrestal and Paul Nitze of Dillon, Read and Company, and John Foster Dulles of the corporate law firm Sullivan and Cromwell. Both companies were involved in floating loans for the Third Reich. GM's Knudsen called Nazi Germany »the miracle of the 20th century.« In 1939 Dulles told the Economic Club of New York: »We have to welcome and nurture the desire of the New Germany to find for her energies a new outlet.«

Dulles later became secretary of state under the Eisenhower administration. His brother Allen--who as a young Foreign Service agent helped install Europe's first fascist regime, that of Miklos Horthy in Hungary in 1921--became the CIA's first director. In 1932 both Dulles brothers boycotted their sister Eleanor's wedding because the bridegroom was Jewish. Forrestal went on to become the first U.S. secretary of defense. His career ended in 1949 when he threw himself from the window of Bethesda Naval Hospital after screaming that »Jewish Communists« were coming to get him.

Henry Ford and GM's James Mooney became personal friends of Der Fuehrer, who awarded them both the Order of the German Eagle, the Third Reich's highest honor, in 1938. Ford was singled out for praise in Hitler's book »Mein Kampf.« Ford's pro-Nazi sentiments reached beyond his pocketbook. He wrote a vicious anti-Semitic tract called »The International Jew« that was reprinted by the Nazis. His plants in Germany adopted an »Aryan-only« hiring policy in 1935, before Nazi law required it. In 1936 Ford dismissed its German manager, Erich Diestel, because he had a Jewish ancestor.

Still, there were frictions between Wall Street and the Third Reich. Hitler represented German, not U.S., capital. He outraged U.S. investors by restricting repatriation of profits and canceling Germany's bond payments. Nonetheless, there were still profits to be made. U.S. investment in Germany grew by nearly 49 percent in the 1930s. It fell everywhere else in continental Europe.

Besides, Wall Street's and Washington's attitude toward Hitler wasn't guided solely by concern for immediate profit. It was clear that Nazi Germany was preparing for war--and that it was casting covetous eyes on eastern Europe, which German capitalists have always viewed the way Wall Street views Latin America. Wall Street and Washington--and London and Paris--wanted to ensure that the Nazi war drive went even further east. They wanted to use Hitler to destroy the country that every capitalist hated: the socialist Soviet Union.

[Sources for information confirming the ties between U.S. big business and the Nazis include the diaries of U.S. Ambassador to Germany William Dodd, 1934-38; the war diaries of U.S. Treasury Secretary Henry Morgenthau; and »The Collapse of the Weimar Republic« by David Abraham.]

http://www.wildcat-www.de/zirkular/16/z16histo.htm
Posted by Alex Constantine at 10:46 AM