AMERICAN SUPER TERROR AND THE POLITICS OF 9-11 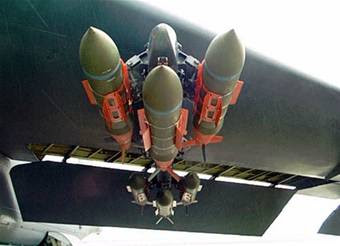 This is one of the weapons being used by the American forces to evoke terror and violence in Afghanistan: The GBU-31. Dropped from a plane, hurtling toward its target at 300mph, the 14-foot steel bomb uses small gears in its fins to pinpoint its path based on satellite data received by a small antenna and fed into a computer. Just before impact, a fusing device triggers a chemical reaction causing the 14-inch wide weapon to swell to twice its size. The steel casing shatters, shooting forth 1,000 pounds of white-hot fragments traveling at 6, 000 feet per second.

What is even more horrifying is that the explosion creates a shock wave exerting thousands of pounds of pressure per square inch (psi). By comparison, a shock wave of 12 psi will knock a person down; and injury threshold is 15 pounds psi. 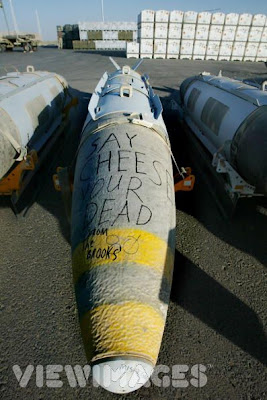 The pressure from the explosion of another device, the Mark-84 JDAM, can rupture lungs, burst sinus cavities and tear off limbs hundreds of feet from the blast site as it generates an 8,500-degree fireball, gouges a 20-foot crater as it displaces 10,000 pounds of dirt and rock enough to knock down walls blocks away and hurl metal fragments a mile or more. (1)

At that speed and pressure exerted by these weapons, no one can safely assure that civilians will not be harmed. As such, a series of these high profile bombings and killings of civilians by the US forces in Afghanistan at its continuing occupation and intervention in Afghanistan's political affairs has caused much destruction and loss in the country. This is called terrorism.

The American media has conducted a systematic cover-up of the real economic and strategic interests that underlies the war against Afghanistan, in order to sustain the pretense that the war emerged overnight, full-blown, in response to the terrorist attacks of September 11. The Bush administration began its bombing strikes on the hapless, poverty-stricken country on 7th October 2001, and ground attacks by US Special Forces began on 19th October 2001.

There is not a single doubt that the heinous acts of terrorism of September 11, 2001 cannot be justified on any grounds and must be condemned as it is a crime against humanity.

However, the global perspective painted by the media seems to downplay the role of the State; a super power who harnesses an overwhelming global military strength to ensure its global hegemony.

The US has been using their political and military muscle to bend laws and ignore general consensus before 9-11, and it seems to a greater extent, years after. The United States ruling elite has been contemplating war in Central Asia for at least a decade since 1991, following the defeat of Iraq in the Persian Gulf War.

The US is eyeing to control the flow of oil in the Middle East. As we already know, Iraq has the world's second-largest oil reserves after Saudi Arabia. More importantly, the US is reliant on the oil from this region. Interestingly, as much as 13% of China's oil comes from Iraq to support her (China) rapid development.

To this end, Super Terror is the weapon that the US elites use to protect and enhance Israel's position in the Middle East.

Using the war on terror as its shield, US has once again become militarily active in Southeast Asia as it raises its stakes in the region while attempting to contain and ride the wave along with an economically dynamic China.

This allows the US direct or indirect control to invoke its military power to instill fear among many people around the world for the continuation and perpetuation of the US led global capitalism which can be termed as "3C Capitalism": Corporate, Casino and Consumerist.

Elsewhere, in Venezuela, the terrorism against the Venezuelan people did not begin with the Chavez government. This Super Power we spoke of earlier has been supporting dictatorial governments in order to get control over the oil industry and the train services to penetrate its security and military forces, ultimately to avoid uneconomic social revolts in Venezuela.

The same Super Power is also exerting its power against democratically elected and progressive governments and authentic revolutions in Cuba and Venezuela.

Countries such as Cuba and Venezuela who choose to exercise and uphold their right to act as democratically elected and progressive government, has paid a high price, and continues to pay for her choices. A pertinent example is the Bays of Pigs Invasion in 1961 and the first bombing of a civilian airliner which exploded just after its takeoff from Barbados, killing all the 73 people on board, among others.

Nonetheless, the perpetrators of that bombing, Luis Posada Carriles and Orlando Bosch are free in Florida whilst the five Cubans who opposed to this sort of terrorism was subjected to unfair and biased trials which led to their conviction and was sentenced to a four life terms and 75 years of imprisonment. The unjust persecution, trials, conviction and sentencing was also attributed to the anti-Cuba prejudice in Miami.

Another clear example of the US's involvement in the South America region can be seen in Operation Condor which caused the deaths of many great leaders and ministers such as Former Chilean foreign minister Orlando Letelier, Carlos Prats, Juan Jose Torres and Zelmar Michelini. They are amongst the 12,000 people who were killed or assassinated during the military regimes in Argentina, Chile, Uruguay, Brazil and Paraguay, marking this as the ultimate military dictatorship regime in the 1970's and 1980's.

In Argentina for instance, 30,000 people went missing and there were 368 concentration camps where they were subjected to torture and demeaning acts which includes some people been thrown alive into the sea.

El Salvador was another direct target of terrorist actions designed by US administrators since the CIA financed and developed paramilitary groups to enable the killing of thousands of people which caused an extensive amount of losses to the country in the period between 1980 and 1992.

In 1983, US troops invaded another sovereign nation, the small Caribbean island of Grenada following a bloody coup d'etat. Six years later, the US unleashed an invasion in Panama on a pretext to apprehend a former US ally. That invasion unfortunately killed thousands of Panamanians and caused severe loss to the country.

The experiences that many countries in the South American region have endured and what Cuba and Venezuela still face today for their decision to live as sovereign countries, are clear indications of what a Super Power can do to undermine peace and imposed a global hegemony.

Lifting the veil, one will notice that the US, through the so called 'War on Terrorism' has been spreading its poisonous hegemonic tentacles of power to choke and threatened the rest of the world. By doing so, US have direct access to Central Asian republics and the ultimate control of their oil and gas by ousting the Taliban and forcing itself on Kabul.

This was done at a hefty price of the lives of 1.2 million people, whose lives have been lost because of the conflict in Iraq to date. As many lives were taken from the US led invasion and occupation in Afghanistan and has also resulted in more suicide bombings and other insurgent attacks to rise dramatically this year.


We must therefore, take courage to stand up and condemn those responsible for these acts of terror, and put blame where blame is due. All this must begin with awareness. This Campaign is where we hope to foster this.

Part of our efforts in ensuring that We can each play our individual parts, we need to identify the different perspectives available.

Consider the role of the Media. The Media plays a very important role in order to highlight and expose social related issues. The Media is accountable for responsible reporting.

Whilst one can never be too young to be made aware of matters such as these, young people should be encouraged to think critically in order to exercise their discretion properly.

We must also make an effort to understand the psychological make-up of a terrorist, not to criticize and demonize but to understand and help in their sufferings.

Furthermore, international policies have to be amended accordingly to criminalize illegal international acts for example, wars. This is should be done in order to stay in line with the ever changing needs of society.

Last but not least, the role of our Government to focus on the necessary to ensure the continuity of peace and stability.


Evelyn Khoo Lyn Yin is a member of JUST

Dr. Chandra Muzaffar "An overview of Super Terror and the Politics of 9-11"

Mr. Dave Lindorff " Terrorist Nation ? Takes one to know one"

Note: (1) By Marc Herold, a Professor at the University of New Hampshire who has been documenting the violence in Afghanistan, investigates the use of this weapon and offers his description of how it works.