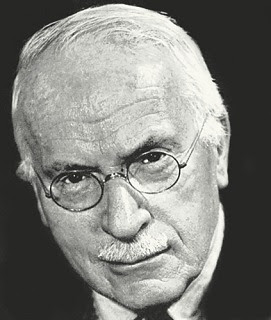 The Swiss psychoanalyst of the collective unconscious collaborated with the American secret service between 1942 and 1945, protected by future CIA Director Allen Dulles.

His analyses of Hitler and Mussolini for propaganda purposes interested General Eisenhower.

For code 105, Burns [an alias for A. Dulles]. I contacted the famous psychoanalyst, professor C. G Jung. His analyses of the reactions of German leaders, especially of Hitler because of his psychopathic tendencies, should not be underestimated. Jung is persuaded that Hitler will resort until the end with all despaired measurements, but he does "not exclude the possibility of a suicide in one moment from crisis." Words simple, direct, classified as "secret" and dispatched of Bern in the afternoon of February 3, 1943 to announce a small revolution. Artisanal beginnings of "psychological shaping", still experimental marriage of espionage and psychoanalysis applied to the highest level. Because the enigmatic "Burns", the mailer of this telegram (see our exclusive reproduction on page 47) is no other than Allen Dulles, a Master of American espionage entered Switzerland early and was installed in the heart of Bern. As for "105," the coded recipient of the message, it appears to be colonel David Bruce, one of the heads of the OSS, the Office of Strategic Services, ancestor of the current CIA.

How one of the most significant spies of the century (Allen Dulles will be propelled to the head of the CIA in the post-war period) and Carl Gustav Jung, the inventor and explorer of the concept of the collective unconscious, compare their reflexions during WW II and enter the psyché of Hitler? It is the history which tell of the recently declassified American documents and of the new Swiss sources found by "Hebdo". As many files show this collaboration, as all that touches with the psychoanalysis, thrived in quite disconcerting circumstances.

It all begins with the arrival in Bern of Allen Dulles at the end of 1942, a few hours before the complete closing of the borders. Dulles's mission, as explained in "Underground Germany", consisted in "making to a report/ratio on the secret movement of anti-Nazies in Germany". What pushed him to contact Dr. Jung was appreciation of his knowledge of the Germanic heart, shared during a discussion in Harvard in 1936.

Dulles is not satisfied to see Jung collect useful information (as the telegram of February 3, 1943 shows): He also recruits one of Jung's patients. Was the patient recommended by the psychoanalyst? We are unaware of this. But we know that the American spy "tended to accept the judgement of Dr. Jung of the man" (even an unknown, note) "as long as one had not brought the undeniable proof of the opposite to him" (new letter of March 14, 1950, reproduced below).

The Master spy, who lacks personnel in Switzerland, thus trusts a named beginner, Mary Bancroft, journalist, American and wife of a Swiss citizen, she thentook treatment from professor Jung to rid herself of repetitious sneezes. This 38 years romantic woman is favorably impressed by Dulles, "this 49 year-old pipe smoker with the pink face, a gray tweed and equipped with a pair of piercing blue eyes, with the air of open and merry manners." She falls under the charm of Dulles and accepts the offer of employment. Here it is the apprentice spy, and soon mistress of her owner.

Carl G Jung profits in turn from the confidences of Mary Bancroft and the regular visits of Dulles, as this last in a letter gone back to February 1950 explains it (Allen Dulles Papers, Université of Princeton, Box 39, folder 3): "During my stay in Switzerland, I from time to time had long conversations with Dr. Jung concerning the political news and the characteristics of the disasters leaders of the Nazi Germany and fascistic Italy."

As many meetings which make it possible to the psychoanalyst to observe the operation of the duet of American spies. Amused, it launches in Mary Bancroft while drawing on its pipe: "Your friend Dulles is hard to cook, I am content that you are his confidante." Which hastens to encourage Jung to specify its thought: "Of the men like Allen, very ambitious and in stations of being able, need to intend female opinions to give best their judgements and not to exceed the limits."

The beginner has well sorrow to hold her language. She precipitates at Jung as soon as Dulles entrusts a mission to him which requires greatest discretion, as she explains it in "Autobiography of has spy" (this autobiographical work published in New York in 1983 is unperceived past and is quasi untraceable in Switzerland, note).

Jung learns thus that Allen Dulles required of Mary Bancroft to write a book on the plot missed against Hitler, by tapping a maximum of information to the passage to surviving plotters, Hans Bernd Gisevius, a spy of Abwehr based in Switzerland.

Very quickly informed of the bonds which link Dulles and Bancroft with Jung, Gisevius also requires him to meet the psychoanalyst. It had indeed been impressed by the article of 1936 devoted to "Wotan", the German god of the war whose Jung announced the alarm clock devastator.

The interview offers a new role to Jung, quickly promoted consulting in interrogations. Having discussed with Gisevius, Jung advises Mary Bancroft on the tone right to adopt with its German interlocutor "to make him spit the piece": "never ask him a fact! It is of the same psychological type as you: this kind of question would put it out of him and it would be the end of the discussion free, associative, which makes it possible to learn from the things."

Put at the current of the meetings of the Jung-Bancroft-Gisevius trio, and thus of the indiscretions of sound apprentie, Allen Dulles cille not. But it ends up exploding when Mary evokes its extraordinary capacity to send mental messages to Gisevius, gift which intrigued Jung at the point to require long explanations of him on this subject.

It is that, well before the invention of the gadgets worthy of 007, Mary Bancroft and Gisevius had developed a means of communicating that would not have disavowed Q, the equipment supplier of Jump. Mary Bancroft claims indeed that it was enough for him to think of Gisevius during ten minutes so that this last understands that it was to call it. An anecdote which is not taste of Dulles which launches to its mistress: "I would like that you ceases these enfantillages! I do not make a point of entering the history because I am quoted in a note with the bottom of a page detailing the cases studied by Jung!"

The American spy feared that the posterity does not forget its work of the shade not to retain that will have it dazzling of Jung. It is however the reverse which occurred. The specialists in the psychoanalysis spent these five last decades chamailler to know if one were or not to present Jung like a sympathizer Nazi, suspicion that Dulles qualified into 1950 of "gossip" (rumour) and that Jung charges to "its enemies the American freudiens which hate it" (new letter of September 24, 1945 deposited at the polytechnic School of Zurich).
During this time, the specialists in espionage detailed the exploits of Dulles without discovering the discrete traces of its profitable collaboration with Jung. A lapse of memory which should be soon repaired, as the last sums devoted to Dulles show it which start to briefly announce the presence of Jung among its consultants (to read in particular "Allen Dulles" by James Srodes, 1999, "Gentleman spy" by Peter Grose, 1996 and "From Hitler's doorstep" of Neal Petersen ", 1998). An injustice that the close relations could have repaired more quickly, if they had dared to evoke their memories publicly: "the members of the family knew that Jung had known Dulles, Ulrich Hörni confirms, who takes care on the files of the psychoanalyst in Switzerland, but they never spoke about it openly. You include/understand, this kind of subject was rather secret." So secret that Jung failed well to carry it in its tomb.
Posted by Alex Constantine at 4:12 PM