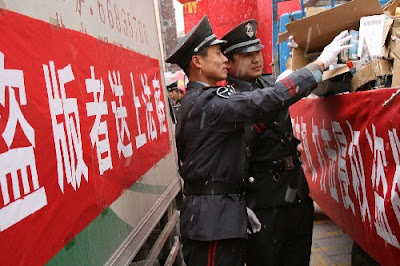 WASHINGTON - Harry Wu, a Chinese American human rights activist, released a report Thursday charging that the World Bank is funding a quasi-military organization in China and covering up that relationship.

Wu said the World Bank has awarded more than $100 million in projects since the mid-1980s to the group, which he said runs forced-labor camps and has violently suppressed protests by Muslim peasants called Uygurs in the remote province of Xinjiang in upper northwest China.

"That the World Bank works with this organization is an outrage," Wu said at the National Press Club. He said his study is based largely on internal Chinese documents, which show the military functions of the Xinjiang Production and Construction Corps, or XPCC.

Wu, who spent 19 years in China's forced-labor camps known as laogai before emigrating to the United States, said the Pentagon as well as China's State Council and its Central Military Organization consider the XPCC a military organization.

"So does nearly everyone - except the World Bank," said Wu, who has often
returned to China to document human rights abuses. Last August, Chinese
authorities expelled him from the country after a trial in which they charged him with spying.

Wu, a resident of Milpitas and a scholar at Stanford University's Hoover
Institution, urged World Bank President James Wolfensohn to name an
independent international commission to investigate the bank's projects in
Xinjiang.

Wu said the bank's internal review, released in December, failed to mention
a $12 million seed-development project with the XPCC.

Jeff Fiedler, director of the Laogai Research Foundation that Wu leads,
said: "The bank clearly cannot investigate itself." He and Wu said the
bank's projects inevitably benefited the XPCC's military operations,
including the laogai.

Wu added that the seed project in particular must have helped the laogai,
where prisoners work in cotton fields.

"To believe that the XPCC 1st Division is refusing to provide cotton seeds
to its own laogai cotton fields defies credulity, and above all, common
sense," he said.

The World Bank denied that its projects have benefited the group's military
goals.

"There's nothing in it (Wu's report) beyond unsubstantiated allegations,"
bank spokesman Graham Barrett said. "We have no evidence to suggest they
(bank projects) are benefiting the laogai."

Barrett said the Bank has always known that the XPCC runs some prisons, but he said its mission is much broader, since it also runs state farms and
other civilian projects. He said working with the group is the only way to
help the region's poor people.

"There's no conspiracy; there's no coverup," he said.
Posted by Alex Constantine at 12:22 PM