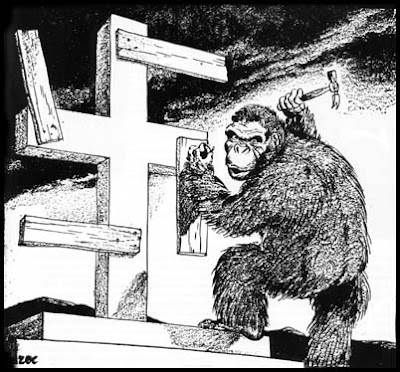 This article presents the actual note page from which Hitler uses the Bible as the monumental history of mankind for which we can give thanks to Werner Maser for bringing it first to publication in his book, "Hitler's Letters and Notes."

Hitler wrote these private notes while in his 30s and they predate his political career. Although Hitler wrote his first political antisemitic letter to Adolf Gemlich on September 16, 1919, these notes show the Biblical influence on the young Hitler in regards to his views on race laws at around the same time. Hitler's 1919 letter without his notes to provide context has led many scholars to incorrectly conclude that Hitler's antisemitism started from a purely secular mind-set. The Biblical references, especially in regards to the race laws mentioned in these notes, clearly shows that Hitler had a religious reason for his Jewish hatred and his views on race laws which later turned into the Nuremberg laws.

Remarkably Maser (and all other historians) never explains Hitler's view on race laws in regards to these notes and how they parallel the Nuremberg laws, nor do they explain such items included within the outline such as "Lord Disraeli," and "Eternal course of History," all of which bears some importance if we wish to understand the foundational beliefs of Hitler. For this reason, I've presented the entire outline from that note page with its English translation so that readers can study it themselves.

The outline comes from Werner Maser's book, "Hitler's Letters and Notes," translated by Arnold Pomerans [graphic of page from Hitler's Bible]. Unfortunately I could not get a good enough scan to read his German script, but I present it here so you can see how he structured his outline.

(The text below shows the English translation) 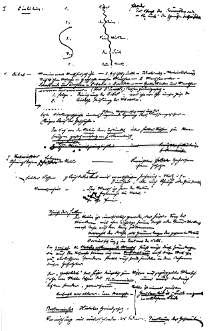 The following shows the English translation of Hitler's outline with roughly the same structure as above. [This translation appears on page 283 of Maser's book.]

First people's history (based on) the race law--

I Unconscious [crossed out] Consequences
Blind following of nature ------

'Man is Lord of Nature'

'He subdues Nature'
He is free

Weakness of the half-baked
Nature is quite unbending, which means: Victory of the
stronger whose strength or will gives him a greater claim to victory

Privilege through strength the basis of all Nature
The prerequisite of the world's existence.

the man of genius in tune with nature does not try to test this law
which also informs his own ideas about the world
but performs all his actions in accordance with it.

The 'educated man', i.e., the man who as been spoon-fed with
knowledge substitutes the idea of humanity and hence
becomes 'cruel' in the end.

Interestingly, Hitler's introduction immediately starts with the Bible and then follows with The Aryan, His Works (presumably the Aryan works), The Jew, and His Work (presumably the Jew's work).

Then comes the 1st item of his outline, The Bible-- Monumental History of Mankind, with the "Children of God and Men", "Basic Race law," "First people's history (based on) the race law" and "Eternal course of History," all under the subset of The Bible-- Monumental History of Mankind. This bears importance because it shows Hitler here connecting his racial thoughts directly with the Bible which he apparently thought of as not only the actual history of mankind but a Monumental one at that. He sees humans as two types, "Children of God and Men." There's no question that Hitler thought of Aryans as separate and superior to Jews, as he so often expressed. The obvious interpretation here means that The Aryans represented the children of God (the Builders) and the Jews as the children of Men (destroyers).

Then we have the curious mention of "confused and muddled- (Lord Disraeli) Basic Race Law." Who did Hitler refer to as Lord Disraeli? Undoubtedly he means Benjamin Disraeli (1804-1881), First Earl of Beaconsfield , member of the House of Commons who later became prime minister and who authored several books. Disraeli's parents were Jewish but he himself converted to Christianity.

I think if would appear odd that Hitler would have mentioned Disraeli at all if at some level he did not agree with him. He did not write that Disraeli was wrong but only "confused and muddled." To understand why he might have mentioned him here requires an understanding of Disraeli.

Like Hitler, Disraeli thought of the Jews as a race. He thought that Jews could be found at the head of every secret society and that they accumulated wealth in spite of cultural pressures against it. Disraeli thought of his religion as "true Christianity" and wished that the Jews would convert. (for example, see Disraeli's 1852 book, on the Political Biography of Lord George Bentick). But at the same time, Disraeli also supported Judiasm and fought against anti-Semitism. Disraeli's father had anonymously written a book titled "The Genus of Judiasm" that glorified Judaism. It should come to no surprise that Disraeli would follow some of his father's footsteps.

Moreover Disraeli thought of Jesus as a Jew as he stated clearly: "...there is one fact which none can contest. Christians may continue to persecute Jews and Jews still persist in disbelieving Christians, but who can deny that Jesus of Nazareth, the Incarnate Son of the Most High God, is the eternal glory of the Jewish race?"

In a 1942 speech, Hitler reinforces Disraeli's (and Hitler's) belief about the race "problem":


The British Jew, Lord Disraeli, once said that the race problem is the key to the history of the world. We National Socialists have become great in this knowledge. By devoting our attention to the existence of the race problem, we have found the solution for many problems which would have otherwise have seemed incomprehensible . . .

--Hitler in an address to the Reichstag, 6 April 1942 (source: www.adolfhitler.ws)

Hitler in his notes, probably refers to Disraeli as "confused and muddled" against his own beliefs. Hitler also thought of Jews as a race rather than a religious group but he certainly did not think of Jesus as a Jew. Hitler believed in an Aryan Jesus as he expressed several times later in his life. To understand this particular German kind of reasoning, the idea of a mischling prevented Jesus from the Jewish fate. According to Hitler's mischling theory, Jesus, fathered from a non-Jew God, and who never married, excused Jesus from Jewishness (when you deal with beliefs in the supernatural you can justify anything. The mischling theory has just as much validity as the most liberal minded Christian interpretation, which gives just one reason why beliefs, especially religious beliefs can prove so dangerous).

Then comes an amazing and revealing statement: "First people's history (based on) the race law--".

Here we have Hitler connecting race law based on the First people's history, which of course, falls under the heading of the outline as The Bible-- Monumental History of Mankind!

To understand how the Bible refers to race law, as the Nazis saw it, requires reading of the Nuremberg laws and Biblical references to the Old Testament that can lead to such beliefs. The Nazi, Julius Streicher, explained during his trial that the race laws got based on Old Testament laws:

"I have written such articles again and again; and in my articles I have repeatedly emphasized the fact that the Jews should serve as an example to every race, for they created the racial law for themselves-- the law of Moses, which says, "If you come into a foreign land you shall not take unto yourself foreign women." And that, Gentlemen, is of tremendous importance in judging the Nuremberg Laws.. These laws of the Jews were taken as a model for these laws. When after centuries, the Jewish lawgiver Ezra demonstrated that notwithstanding many Jews had married non-Jewish women, these marriages were dissolved. That was the beginning of Jewry which, because it introduced these racial laws, has survived throughout the centuries, while all other races and civilizations have perished."
--Julius Streicher (Trial of The Major War Criminals Before the International Military Tribunal, Nuremberg, 1945, Vol. 12)
(The Nuremberg race laws outlawed Jews from marrying Aryan Germans, just as the Bible outlawed against marrying outside one's group.)

Although Julius Streicher influenced the race laws, Hitler's outline clearly shows that he predates all other Nazis in this regard.

Hitler's mention of "Eternal course of History" shows his view of a religious concept (eternity) connecting to the course of History as a development from "half-knowledge via instinct" to a "clear understanding of its laws." Since "laws" falls under the heading of The Bible-- Monumental History of Mankind, what other laws could he mean here except from the laws he sees deriving from the Bible?

When Hitler writes "Man is Lord of Nature," and "Privilege through strength the basis of all Nature," he explains this clearly in Mein Kampf when he wrote against modern pacifists: "Man's role is to overcome Nature" [Vol. 1, Ch. 11]

Hitler concludes with "Racial purity" as the "highest law" which, of course Hitler attempted to enforce after he won his political fight for power. He sees miscegenation (the interbreeding of races) with "inferior" types as lowering the level as a whole. We now know that Hitler viewed any other people than "the children of God" as inferior which, in his mind, would include Jews, blacks, gypsies, homosexuals, and atheists.

Also revealing from Hitler's notes (not shown here) comes his last will and testament "My Testament" (presented in Maser's book) where he tells what should happen upon his death. In it he orders that his letters of "a personal and private nature either to be destroyed or to be handed over to my sister Paula..." This shows that he did not intend his private writings for the general public or for propaganda purposes. These notes represent the actual and private thoughts of Hitler.

Many have attempted to dismiss Hitler's speeches or public announcements where he mentions religion, as a ploy to gain political support. But this hypothesis never gets met with evidence, and they leave us only with their opinions and beliefs. Hitler's private notes tell us otherwise because they agree with his later public pronouncements and give them an authentic mirror to his thoughts presented in his private notes.

Of course Hitler wrote many other notes and letters, but this particular outline based on the Bible represents, perhaps, the most revealing of his private thoughts in regards to his religious beliefs at a time before he came into power.

I do not aim here to present a thorough look at these notes, but only to highlight a few important aspects. It might bear some importance for future scholars to examine Hitler's private letters and notes in depth to shed more light as to why Hitler acted as he did. But clearly his private notes show the influence of the Bible on his racial views against the Jews.

Trial of The Major War Criminals Before the International Military Tribunal, Nuremberg, 1945, Vol. 12

http://nobeliefs.com/HitlerBible.htm
Posted by Alex Constantine at 11:11 AM