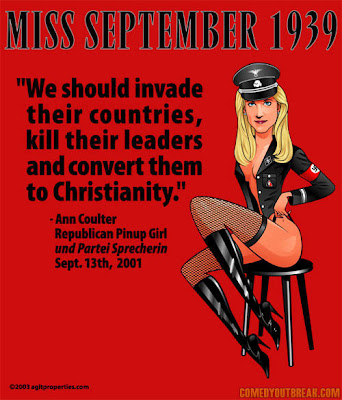 Ann Coulter may be a political pundit but she clearly knows very little about religious theology and interfaith issues. Coulter's remarks are outrageous, offensive and a throwback to the centuries-old teaching of contempt for Jews and Judaism.

The notion that Jews are religiously inferior or imperfect because they do not accept Christian beliefs was the basis for 2,000 years of church-based anti-Semitism. While she is entitled to her beliefs, using mainstream media to espouse the idea that Judaism needs to be replaced with Christianity and that each individual Jew is somehow deficient and needs to be "perfected," is rank Christian supersessionism and has been rejected by the Catholic Church and the vast majority of mainstream Christian denominations.

Clearly, Ann Coulter needs a wake-up call about the power of words to injure others and fuel hatred. She needs an education, too, about the roots of anti-Semitism and the shared values of Judaism and Christianity.

Christians and Jews have worked tirelessly for more than 40 years to overcome the past and to promote a more tolerant and pluralistic vision for the future and especially for America.

Donny Deutsch is to be commended for his immediate and forceful denunciation of Coulter's statements, for calling her remarks personally offensive, and for rightly characterizing her suggestion that Jews are inferior to Christians as anti-Semitism.