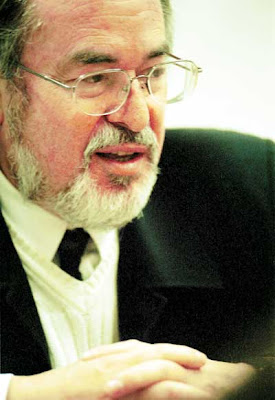 Horowitzo-Fascism is taking hold on college campuses across our beloved nation. College professors - troughing foundation largesse from THE SAME CORPORATIONS THAT FUNDED HITLER - have been known to praise Governor Bush and the "war" in Iraq. Unbelievable. Take it to the campus - inform faculty and students of all stripes that a ruthless, BEARDED, determined internal enemy is corroding blood-stained American values. He advocates the gutting of Constitutional principles, and has no respect for human rights. Call him SWINE or DAVID HOROWITZ, it smells the same. AND it lies about liberalism, spreads xenophobia, terror, ignorance, misplaced faith in authority, corporatism - FASCISM.

David Horowitz—the Marxist turned neoconservative—will be speaking on campus next week as part of the inaugural Islamo-Fascism Awareness Week. The festivities are scheduled to take place on campuses from University of California, Los Angeles to Brown University to DePaul University, showcasing the brightest stars in the global fight against fascism, running the not-so-lengthy ideological gamut from Ann “Convert Them to Christianity” Coulter to Robert “Why Christianity Is a Religion of Peace and Islam Isn’t” Spencer.

Horowitz will be joined on our campus by the ever-thoughtful and nuanced sage, Sean Hannity, of the ever-thoughtful and nuanced Fox News. Together they will be spreading the ugly news that, according to Horowitz’s Oct. 15 article in Spectator, “150 million out of 750 million Muslims support a holy war against Christians, Jews, and other Muslims.” They will declaim the apocalyptic threat to Western civilization posed by this new Hitler-inspired army bent not only on our destruction but the subjugation of us all to a medieval caliphate, in which women and homosexuals are enslaved while the rest lie entombed in a theocratic dystopia.

But where does Horowitz derive his pedigree to lecture us on the threat of fascism? It seems nowhere. Horowitz is on the extreme fringes of the right wing in America that spews invective against whatever ideology or politic the American government designates as its voguish enemy. Horowitz’s ideology has actually led him to support a surfeit of actions that have strengthened the hand of fundamentalist Islam and made its spread inevitable. First was his typically overwrought support for the attack on Iraq by the United States and Britain. As the war in Iraq was building up, Horowitz wrote in the Jewish World Review that if anti-war demonstrators were successful, “all over the Middle East and the Muslim world, fanatical haters of Americans, Christians and Jews will take heart from Saddam’s successful defiance, will draw the conclusion that the West is weak, and will be inspired to commit new atrocities against its most defenseless citizens.”

In fact, the classified U.S. intelligence report by the National Intelligence Estimate (NIE), “Trends in Global Terrorism: Implications for the United States,” revealed the huge effect the war in Iraq had on increasing Islamic radicalism and spreading it to a new generation of young Muslims who would now be more likely to attack Western targets. And in Britain, a report by the Joint Terrorist Analysis Centre—which is composed of officials from MI5, MI6, Government Communications Headquarters, and the police—stated, “Events in Iraq are continuing to act as motivation and a focus of a range of terrorist-related activity in the UK.”

Horowitz also forgets to mention the succor the American government has given to Islamic fundamentalists all over the Middle East. The most barbaric and reactionary incarnation of political Islam in recent history has been the Taliban of Afghanistan—formed from the remnants of the mujahideen—who fought the Red Army during the invasion of Afghanistan in 1979. The footnote of their rise is that the jihadis were given arms and encouragement from Horowitz’s biggest hero, President Ronald Reagan.

All over the Middle East, the U.S. has quashed secular Arab nationalism. The most potent bulwark against this upsurge in the secular nationalism embodied by leaders like Anwar Al-Sadat and Gamal Abdel Nasser, was Islamic radicalism. The same is true for Israel—another one of Horowitz’s Holy States. According to Robert Dreyfuss, author of the book Devil’s Game: How the United States Helped Unleash Fundamentalist Islam, “There’s plenty of evidence that the Israeli intelligence services, especially Shin Bet and the military occupation authorities, encouraged the growth of the Muslim Brotherhood and the founding of Hamas [in Palestinian territories].” The most backward and fundamentalist Islamic state in the Middle East is Saudi Arabia, a sordid marriage of the Saudi dynasty and the extreme Wahhabi strain of Islam. Women can’t drive cars there and Sharia law stipulates the removal of the hands for petty theft.

Go on, guess who the biggest friend of the United States is in the Middle East aside from Israel? That’s right, Saudi Arabia. The treatment of women in that genuinely medieval state makes Ahmadinejad’s Iran look like a feminist utopia. But Horowitz’s salvos remain trained on the official enemies of his Holy State, and currently that’s Iran. One day he might reposition, but he must wait for the nod from the Holy State. The Saudi Arabia example shows by itself that Horowitz and his fellow travelers have little regard for the rights of women and homosexuals under Islam. If women or homosexuals happen to live in an oppressive country that America and Britain want to bomb, then they will be supported with reams of invective. If they live in one that pumps out oil for our consumption and keeps their population subjugated, they can expect to receive nothing from Horowitz.

It also shows that Horowitz and his ilk don’t care about fascism, as long as the fascists are our friends. In fact, Horowitz has prasied the Contra fascists of Nicaragua who launched an attack on the democratically elected Sandinista government in the 1980s, an offensive that led to thousands of deaths. “I can’t wait for the contras to march into this town and liberate it from these fucking Sandinistas!” he said as the fascist paramilitaries were liquidating a democratic government. And then there’s General Pinochet, the fascist dictator of Chile, who presided over a prison state for 15 years, rounding up and murdering thousands of left-wing activists. Horowitz, referring to calls to imprison Pinochet on his trip to Britain, said, “Imprisoning Pinochet on a foreign trip to seek medical help is one of those bad ideas of progressives that will come back to bite them.” He instead notes, “Under the 15 years of Pinochet’s rule, Chile had prospered so greatly that it was dubbed the ‘miracle economy,’ one of the two or three richest in Latin America.”

And, amazingly, Horowitz isn’t even the worst of the nomadic warriors that are educating the country during this Islamofascist Awareness Week. His buddy Ann Coulter is also on board. This is the woman who wrote after Sept. 11: “We should invade their countries, kill their leaders and convert them to Christianity.” “Their countries” refers, shockingly enough, to any Muslim country. She talks to the University of Southern California on Oct. 25 about how to fight fascism. George Orwell would not know whether to laugh or cry. Horowitz and his cohorts probably aren’t fascists, but they are doing everything to promote its spread by pushing for an imaginary clash of civilizations. He might be an extremist crank, but his crackpot ideas are percolating out into the mainstream, where their hypocrisy and blindness must be fought with a brio equal to his own.

The author is a student in the School of Journalism.

URL: http://www.columbiaspectator.com/node/27528
Posted by Alex Constantine at 4:48 AM