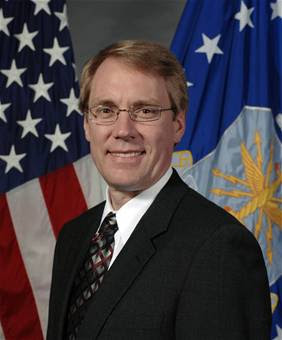 " ... Mr. Riechers had provided technical advice to the Air Force on several programs, including the use of bursts of microwaves as a crowd-control technique ... "

The civilian official, Charles D. Riechers, 47, came under scrutiny by the Senate Armed Services Committee this month after reports that the Air Force had arranged for him to be paid about $13,400 a month by a private contractor, Commonwealth Research Institute, while he awaited clearance from the White House for his selection as principal deputy assistant secretary for acquisition. He was appointed to the job, which does not require Senate confirmation, in January.

Kraig Troxell, a spokesman for the Sheriff’s Office in Loudoun County, Va., west of Washington, said friends found Mr. Riechers’s body at his home on Sunday night. Mr. Troxell said results from an autopsy would be made public on Tuesday, but two military officials said Mr. Riechers had apparently killed himself by running his car’s engine in his enclosed garage.

A retired Air Force officer, Mr. Riechers (pronounced REE-kers) had a record of accomplishment in aviation and electronic warfare and had received commendations for his role as a manager in Pentagon purchasing. The Air Force’s procurement programs have been handicapped for years by accusations of favoritism, inefficiency and technical shortfalls, and Mr. Riechers’s new role in the procurement office was supposed to have been repairing the damage.

Instead, his death appears likely only to call renewed attention to those problems.

Commonwealth Research, registered as a nonprofit organization in Johnstown, Pa., paid Mr. Riechers for two months as a senior technical adviser while he awaited final approval to the Air Force post. During that time, he worked for Sue C. Payton, assistant secretary of the Air Force for acquisition, on several projects for which the service had contracted with Commonwealth Research for technical assistance.

Payments to Mr. Riechers totaling $26,788 were confirmed by Mary Bevan, a spokeswoman for the Concurrent Technologies Corporation, the parent of Commonwealth Research, or C.R.I.

Those payments were first reported on Oct. 1 by The Washington Post. In an interview with The Post, Mr. Riechers said: “I really didn’t do anything for C.R.I. I got a paycheck from them.”

The Air Force has defended the arrangement as routine. The matter raised enough questions, however, that the service asked the Defense Department’s inspector general several months ago to review the propriety of such consulting arrangements. A spokesman for the inspector general said Monday that the review was still under way.

In addition to the recent questions focusing narrowly on Mr. Riechers, the Pentagon and the Justice Department are conducting criminal investigations into the possibility of bribery and other offenses involving some $6 billion in contracts to provide essential supplies to American troops in Afghanistan, Iraq and Kuwait.

Criminal activity aside, Senator Carl Levin, the Michigan Democrat who heads the Armed Services Committee, said at a hearing this month that far too many weapons acquisitions had been plagued by “cost increases, late deliveries to the war fighters and performance shortfalls.”

Mr. Levin said 25 of the Pentagon’s major defense acquisition programs had experienced cost overruns of at least 50 percent. And he expressed concern about an “alarming lack of acquisition planning across the department.”

Last year, the Pentagon canceled a $23 billion deal to lease tankers from Boeing, after the disclosure that the Air Force’s top procurement officer, Darleen Druyun, had favored Boeing in contracts before being hired by the company.

In May, Mr. Riechers told the northern Virginia chapter of the Armed Forces Communications and Electronics Association that the Druyun scandal was an “aberration,” not representative of the Air Force’s acquisition system, and that restoring credibility to that system was one of his top priorities.

Colonel Thomas said that under an existing contract with Commonwealth Research, Mr. Riechers had provided technical advice to the Air Force on several programs, including the use of bursts of microwaves as a crowd-control technique, employing remotely piloted craft in United States airspace and modernizing the C-130 transport plane.

“The Air Force wanted to get him working on Air Force issues, and this was a good way to do that,” Colonel Thomas said, adding that the service stood behind the agreement.

Loren Thompson, a military analyst at the Lexington Institute, said that whether or not Mr. Riechers’s suicide had anything to do with the payments he received from Commonwealth Research, it would cast a further shadow over the Pentagon’s beleaguered procurement system and its most important contractors. Concurrent Technologies has extensive contracts with the Pentagon, intelligence agencies and other federal departments.

Mr. Riechers was a retired lieutenant colonel with 20 years of operational, acquisition and staff experience, according to the Air Force. He had logged more than 1,900 flight hours, with 90 hours of combat and combat support time in B-52G and EC-130H aircraft. He had a bachelor’s degree in computer engineering from the University of Michigan and a master’s in electrical engineering from California Polytechnic University.