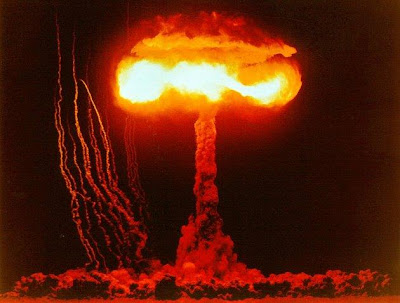 The fresh discovery of U.S. government documents mentioning a secret deal reached during Japan-U.S. talks over the reversion of Okinawa Prefecture to Japanese rule has served as another convincing piece of evidence for the long-held suspicion that the two governments agreed to allow nuclear weapons to be brought into the post-reversion prefecture.

Was a secret agreement reached by the two countries to permit the reintroduction of nuclear arms? This question has long loomed over the talks that negotiated the return of Okinawa Prefecture to Japanese rule.

The newly found documents contain more details than others that have previously come to light. One carries the phrase, "secret U.S.-Japanese agreements," which proves the existence of a clandestine deal.

However, the Japanese government has continued to flatly deny the existence of a secret agreement.

The papers, including memorandums sent by then U.S. national security adviser Henry Kissinger to then U.S. President Richard Nixon, have aroused much interest as they include the expression, "secret Minute to the Joint Communique," which indicates the existence of a secret deal between Tokyo and Washington over nuclear weapons.

Though documents relating to the secret deal were not declassified, it is the first time that a government document written by a negotiator involved in the covert agreement--clearly mentioning the existence of the secret deal--has been discovered. Henry Kissinger worked as a U.S. negotiator for the deal.

The memorandum in question was referred to in the documents as "a proposed game plan...in conjunction with secret U.S.-Japanese agreements on access to post-reversion Okinawa for nuclear weapons."

It also mentions procedures relating to the signing of the agreement by Nixon and then Prime Minister Eisaku Sato in negotiations for the reversion of Okinawa Prefecture.

Japan and the United States agreed in November 1969 that all nuclear weapons would be removed from Okinawa Prefecture, and the Japan-U.S. security treaty and related accords would be applied in the prefecture on the same level as other parts of Japan.

The secret deal was unveiled in 1994 in a book written by Kyoto Sangyo University Prof. Kei Wakaizumi, who was Sato's confidential agent in the negotiations with Kissinger.

The contents of the newly discovered memorandum closely match the descriptions in Wakaizumi's book. Therefore, it is no exaggeration to say that the words and records of Japan and the United States prove the existence of the secret nuclear deal.

Takashi Shinobu, a professor of law at Nihon University who discovered the latest documents, said: "[Sato] had to comply [with the secret deal] due to relations with the United States at the time. But it's possible he held secret negotiations without notifying government offices. It might have been dual diplomacy.

"From the perspective of security policy, the government should reexamine the issue on this occasion," he said.

Concerning the possible import of U.S. nuclear weapons into Japanese territory, the two governments previously established procedures for a consultation system, which were attached to the Japan-U.S. Security Treaty when it was revised in 1960.

The government insisted that the United States notify it of changes related to important weaponry--a reference to nuclear weapons.

In 1967, the government declared three nonnuclear principles, which clearly stated that nuclear weapons should not be brought into the nation. The policies were also adopted in Okinawa Prefecture when it was returned to Japan.

But many declassified U.S. government documents clearly indicate that having nuclear weapons in Japan was extremely important to U.S. strategy during the Cold War.

This is the reason the secret nuclear deal--about which rumor and speculation have existed for decades--is still attracting so much attention.

The government still maintains a stance that relies on the U.S. government's official line. A senior Foreign Ministry official said, "Because no prior consultations have been held so far, nuclear weapons have never been brought into the nation."

Since the 1990s, the U.S. government shifted to a policy in which U.S. warships do not carry nuclear weapons in peace time. As a result, the possibility of nuclear weapons entering Japan has diminished.


It is believed that Sato and Nixon formulated two secret deals in the process of negotiating Okinawa Prefecture's reversion in November 1969.

One was that Japan would allow U.S. forces to take nuclear weapons into Okinawa Prefecture in an emergency. Another was that the Japanese government would shoulder the cost of reforming the land occupied by U.S. forces before the reversion.

Wakaizumi's book said the secret nuclear deal took the form of a minute of the agreements reached on Nov. 21, 1969.

The book clearly states that Sato and Nixon agreed that U.S. forces could take nuclear weapons into Okinawa Prefecture after prior consultations with Tokyo if a serious emergency concerning the defense of Japan and other Far East Asian nations occurred, and that Japan should quickly meet the needs of U.S. forces.

But this document was not released in the latest round of U.S. government document-declassification.

Bunroku Yoshino, former director general of the Foreign Ministry's American Affairs Bureau, who was chief of a delegation in negotiations with the United States in 1971 over the reversion of Okinawa Prefecture, said, "I knew nothing about the secret nuclear deal."

On the Japanese side, it is possible that Sato, Wakaizumi and only a handful of others knew about the secret deal.

Another covert agreement, relating to the cost of returning land in Okinawa Prefecture to its original state, was unveiled in 1972. Takichi Nishiyama, then a Mainichi Shimbun reporter, obtained a copy of a government document that proved the existence of the secret deal, and handed it to a Japan Socialist Party lawmaker, who unveiled the matter in the Diet.

Though the government still flatly denies the existence of the secret deals, testimonies and documents have proved them to be historic facts.