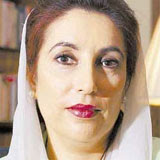 Bhutto: I know exactly who wants to kill me

Benazir Bhutto today accused supporters of the former Pakistani military dictator General Zia-ul-Haq for the assassination attempt that turned her homecoming into a bloodbath.

"I know exactly who wants to kill me," she told the French magazine Paris-Match. "They are dignitaries of General Zia's former regime who are behind extremism and fanaticism."

Nobody has yet claimed responsibility for one of Pakistan's deadliest bombings, which killed at least 136 people and injured 290.

In a subsequent press conference at the Karachi home of her parents-in-law, Ms Bhutto said she had been warned on her flight to Pakistan about a plot involving army officers and told three unnamed people were behind it.
Ms Bhutto, wearing a black armband, said she had not wanted all her top party leadership to travel in her truck as she "knew" there might be an assassination attempt.

She praised those who died while protecting her as heroes, and said she did not blame the government for the attack. However, she called for an inquiry as to why street lights had been switched off during her procession.

"If the street lights had been on, we would have spotted the suicide bombers," she said. "The guards had floodlights on, but it was difficult to scan the crowds as there were so many people".

Denouncing her would-be assassins as trying to destroy Pakistan and saying they had damaged Islam, she added: "It is against our religion to kill innocent people".

The Pakistani government has blamed Islamist militants for the assassination attempt. Police are focusing on militants linked to the Taliban and al-Qaida based in tribal regions bordering Afghanistan, where they have stepped up attacks on Pakistani troops.

General Zia seized power in a coup against Ms Bhutto's father, Zulfikar Ali Bhutto, in 1977. The general, who died in a mysterious plane crash in 1988, had Mr Bhutto tried on trumped-up charges and executed.

"We have to purge elements still present in our services," Ms Bhutto told Paris-Match. "Many went into retirement and then were taken back. Today, they hold much power. For them I represent a danger - if I bring back democracy to the country, they will lose influence".

The Pakistani president, General Pervez Musharraf, said he was "deeply shocked" by the attack, and appealed for calm. He promised an exhaustive investigation and severe punishment for those responsible.

Well before Ms Bhutto's return, Taliban commanders had made threats against her life, fearing she would help US troops hunt for Osama bin Laden and other fugitives. One commander, Baitullah Masood, vowed to send suicide bombers to kill her.

"Definitely, it is the work of the militants and terrorists," Javed Iqbal Cheema, an interior ministry spokesman said, adding that it was too early to say which group was involved.

Manzoor Mughal, a senior police official involved in the investigation, told Reuters that the first of last night's blasts had been caused by a hand grenade. "The second was the suicide attack," he said. "The attacker ran into the crowd and blew himself up."

The bombings happened shortly after midnight, more than 10 hours after Ms Bhutto had arrived home from eight years in exile. She escaped unhurt and was evacuated to her residence in the city.

A procession that had attracted several hundred thousand of her supporters was abandoned in chaos.

Local television stations captured the two blasts, which occurred in quick succession near a heavily-protected truck carrying Ms Bhutto and her party leaders.

Television footage showed onlookers running towards the vehicle after the first blast, only to be caught in the second explosion. Party official Qasim Zia said Ms Bhutto had descended into the vehicle to use the bathroom at the time of the explosion.

TV stations showed graphic images of mutilated bodies lying on a street littered with debris, body parts and lumps of charred flesh. A blazing police vehicle stood beside the deserted Bhutto truck, which was emblazoned with the slogan "Long Live Bhutto".

Many of the dead were thought to be police and party security officials who had formed a moving security cordon around the vehicle. A local television cameraman also died.

"People were shouting for help, but there was no one to help them out. It smelled like blood and smoke," the Associated Press photographer, B K Bangash, who was 50 metres from the explosion, said.

The government had mounted a huge security operation. Around 20,000 security personnel lined the route and sophisticated anti-bomb jamming devices were fitted to Ms Bhutto's vehicle.

Mobile phone signals were blocked in the area, and armed bodyguards accompanied the truck.

Ms Bhutto returned from exile hoping to win a third term as prime minister at general elections due to be held by mid-January. With encouragement from the US, she has been holding power-sharing talks with Gen Musharraf.

"She was given friendly advice she should delay her return," he said. "Obviously, she did not take it."

Asked what extra measures the government could possibly have taken given the size of the crowd, he said: "There can never be 100% foolproof security, but you can provide extra efforts. We tried to make the maximum effort possible."

The attack will be seen as a wider assault on the political system in Pakistan. Violent extremists have gathered force in the country this year. In July, an eight-day siege of the extremist Red Mosque in Islamabad in July left more than 100 people dead.

Last night's violence could endanger Ms Bhutto's power-sharing talks with Gen Musharraf, who has threatened to impose emergency rule or martial law if his plans to retain power are frustrated.