Blackwater: Life (and Death) Above the Law 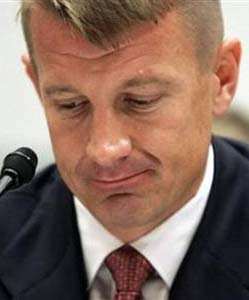 ‘It may be worse than Abu Ghraib.’

Those were the words of an unidentified US military official in the aftermath of an incident in Baghdad in mid-September that saw the death of as many as 20 Iraqis at the hands of private military contractor Blackwater. The US-backed Iraqi Government labelled the actions as ‘criminal’ and talked of ‘the killing of our citizens in cold blood.’

The story has suddenly thrown a welcome focus on an industry that prefers to remain in the shadows; generally unaccountable organisations that have become essential for the US war machine to prosper. Author Jeremy Scahill told the Senate Democratic Policy Committee in late September that Blackwater’s actions were not uncommon and reminiscent of many other mercenaries operating in Iraq since 2003:

They have acted like cowboys, running Iraqis off the road, firing indiscriminately at vehicles and, in some cases, private forces have appeared on tape seemingly using Iraqis for target practice. They have shown little regard for Iraqi lives and have fuelled the violence in that country, not just against the people of Iraq but also against the official soldiers of the United States military in the form of blowback and revenge attacks stemming from contractor misconduct. These private forces have operated in a climate where impunity and immunity have gone hand in hand.

Scahill’s incendiary book, Blackwater: The Rise of the World's Most Powerful Mercenary Army, was a New York Times best-seller earlier in the year and it’s not hard to see why. It was released in Australia last week. His aim is not simply to expose the inner workings of a company that has won numerous no-bid contracts to protect US officials in Iraq, but to understand how such a group could thrive during the Bush years. In less than a decade, Blackwater has emerged from a North Carolina swamp to become, in the words of Scahill, ‘a sort of Praetorian Guard for the… “global war on terror.”’

Led by Christian fundamentalist Erik Prince, the company maintains more than 2300 private soldiers in nine countries, a private fleet of aircraft, gunships and surveillance equipment and maintains the world’s largest private military facility. One US Congressman noted that in military terms, Blackwater could overthrow many of the world’s governments.

Scahill explores the extraordinary decree issued in 2004 by Paul Bremer — the US's administrator in Iraq after the invasion — to immunise contractors in Iraq from prosecution. Private military contractors, paid for by the US taxpayer, could literally get away with murder.

Writer Naomi Klein calls Baghdad’s Green Zone ‘a heavily armed Carnival Cruise ship parked in a sea of despair,’ and the tag fits. The fantasy, pushed by neo-conservatives and war profiteers alike, was that Iraq would be a free-market laboratory to spread the utopia of the market across the Middle East. Blackwater is at the forefront of this assault. Erik Prince has made no secret of his desire to institute a theo-conservative holy war led in part by his own personal army.

Scahill and others have estimated that there are more than 160,000 private contractors in Iraq, a shadow force capable of protecting, cleaning and cooking for US forces. During the debate about possible withdrawal dates, the presence of these individuals is rarely acknowledged. Former Marine colonel Jack Holly has argued that because of public pressure to reduce the US footprint in Iraq, private military contractors will fill the gap. ‘People want a shrinking military presence,’ he says, ‘but the needs and mission don’t shrink.’

Consider these comments by Cofer Black, the company’s Vice Chairman and former counterterrorism chief at the CIA (and current senior advisor on national security to Republican Presidential candidate, Mitt Romney). Addressing a convention of mercenaries in Jordan in 2006, Cofer floated the idea of establishing a Blackwater brigade, ready to be deployed anywhere in the world, for the right price . ‘It’s an intriguing idea from a practical standpoint because we’re low-cost and fast,’ he said. ‘The issue is: who’s going to let us play on their team?’

In the aftermath of the disastrous September shooting in Baghdad, Blackwater head Prince appeared last week before the House Committee on Oversight and Government Reform. When asked about the conduct of his mercenaries in Iraq, he unsurprisingly defended them and denied they had ever killed civilians:

I think there’s been times when guys are using defensive force to protect themselves, to protect the packages, trying to get away from danger. There could be ricochets. There are traffic accidents. Yes, this is war.

You know, since 2005, we’ve conducted in excess of 16,000 missions in Iraq and 195 incidents with weapons discharge. In that time, did a ricochet hurt or kill an innocent person? That’s entirely possible. Again, we do not have the luxury of staying behind to do that terrorist crime scene investigation to figure out what happened.

Iraqi voices have been conspicuously absent throughout the latest Blackwater outrage, but a number of local bloggers passed comment on the event . Baghdad Treasure expressed the opinion of many when he railed against the actions of the mercenaries:

Watching Blackwater’s mercenary actions when I was in Iraq, I grew not only angry but disgusted with their actions that never respect any human being they come across. When they race in the streets of Baghdad, they behave like beasts even in the calmest areas, terrifying people with their SUVs and machine guns and firing without restraint at anyone, knowing that they will never be brought to justice since they are not members of the US Armed Forces.

Blackwater and the many other security contracting companies are part of the problems that are happening in Iraq. People there hate them. They do. I recall many Iraqis wishing their death because they shoot randomly and kill. Some people there link these criminals to the US Army and to the US itself. That’s how sentiments against American troops themselves increased. Of course, I differentiate who’s who, but there are uneducated people who think that these mercenaries are basically the same as any soldier or marine who ‘came to kill, take oil, and then leave.’

For now, Blackwater will continue to operate in Iraq and elsewhere around the world (in the aftermath of Hurricane Katrina, Blackwater men were seen on the streets of New Orleans). The company, along with other private military contractors, has become indispensable in fighting a war beyond the reaches of the law (despite the New York Times hoping for a change in policy).

The Iraqi Prime Minister’s office announced on the weekend that its own investigation had found that the Blackwater men had committed ‘deliberate murder’ in the September incident, and should be charged.

With mounting public pressure at home, the US House of Representatives passed a bill last week to rein in private military contractors, force them to be placed under the jurisdiction of US courts and utilise the FBI to investigate any suspect activity. It’s a positive first step, but the White House is likely to oppose such a move.

And in the coming strike against Iran, the same companies will again compliment a US military force determined to colonise the world’s dwindling oil reserves.

http://www.newmatilda.com/home/articledetailmagazine.asp?ArticleID=2510&HomepageID=224
Posted by Alex Constantine at 8:30 AM