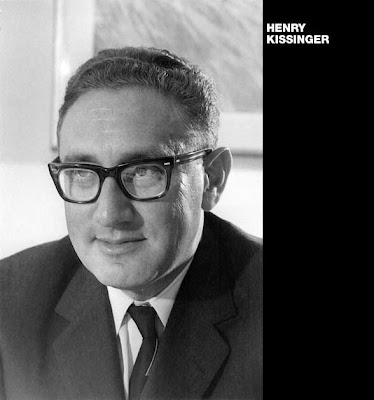 " ... The minutes of a secret 1975 U.S. National Security Council meeting attended by President Ford, reveal Henry Kissinger grumbling, 'It is an act of insanity and national humiliation to have a law prohibiting the President from ordering assassination.' ... ”

Machiavelli must be turning in his grave with envy to see Henry Alfred Kissinger practicing diplomacy and journalism. Had he been alive, he would have seen how the famous octogenarian American is following him in both letter and spirit.

From 1969 on, he has influenced American policy in a way that Machiavelli could only have dreamed of for his Prince. With his advice, he has striven to make this world unlivable for the poorest nations, and has supported despotic regimes across the globe. His words and deeds worked wonders in Chile, Laos, Cambodia, Vietnam, East Timor Argentina, Brazil, Paraguay and Uruguay -- and the list goes on.

The minutes of a secret 1975 U.S. National Security Council meeting attended by President Ford, reveal Henry Kissinger grumbling, “It is an act of insanity and national humiliation to have a law prohibiting the President from ordering assassination.” -- Lost Crusader: The Secret Wars of CIA Director William Colby, by John Prados.

The time was September 11, 1973. The country was Chile. The event was the bloody overthrow of a democratic government. And the criminals were Henry Kissinger, Richard Nixon, the CIA and their man, Chilean Dictator Augusto Pinochet. Thousands of Chilean progressives and democrats were tortured and imprisoned. Pinochet’s regime ruled for decades with the United States’ backing, thanks to Kissinger and his successors

From 1972 to 1975, the Iraqi Kurds were recruited and encouraged by Kissinger to take up arms against Saddam Hussein, later betrayed, abandoned, and left to be gassed and exterminated by heinous dictator on their hillsides.

But Kissinger’s most notorious crime was the secret bombing of Cambodia and Laos during the Vietnam War. He inflicted terror, misery and mass death on these nations. Millions perished in Cambodia and Laos. An estimated 3 million Vietnamese died in the war, and 58,209 U.S. soldiers perished. Vietnamese continue to be affected by poisonous defoliants used by American forces during the war, and by the explosions of bombs and shells buried since the fighting.

He has been the architect of human misery, has sanctioned the destruction of civilian populations, ordered the assassination of “inconvenient” politicians, and approved of the kidnapping and disappearance of soldiers, journalists and clerics.

What an insult to human intelligence that he continues to give his opinion on global affairs and writes columns for The Washington Post, rather than being taken to the gallows, or at the very least put behind bars.

Among the scores of present and former diplomats maligning Islam, no one can match Henry A. Kissinger -- the 56th Secretary of State of the United States from 1973 to 1977, and National Security adviser from 1969 to 1975 -- for duplicity and the twisting of facts. He is a writer par-excellence and inimitable in telling untruths.

In his one piece for The Washington Post, A Nuclear Test for Diplomacy, he redefined the standards of jaundiced political writing. In his nonsensical comparison between Islamic Republic of Iran and North Korea, and discussing the dangers of nuclear proliferation in the Far and Middle-East, made with the most sensible phrasing, he never once mentioned Israel.

Even a novice of global affairs knows which regime poses the biggest nuclear danger in the Middle East -- the Zionist regime.

Setting that aside for a moment, it must be said that there is a world of difference between North Korea and Islamic Republic.

North Korea is a state that not only possesses nuclear weapons, but also has highly developed delivery system. Iran, on the other hand, is simply asking for peaceful nuclear energy and the right accorded it under Nuclear Non-Proliferation Treaty to enrich uranium up to a purity of 3.5 percent level, which is not even weapons-grade.

The CIA admits that North Korea’s Taepo-dong missile can strike North America with a nuclear warhead. It has nukes and missiles. In October 2002, North Korea revealed its nuclear arsenal and kicked out UN inspectors, and Kim Jong-il invited George W. Bush to attack them if he can.

Israel, by the way, has 200 to 500 thermonuclear weapons and a sophisticated delivery system. Many of Israel’s nuclear warheads are targeted on neighboring countries, including new, nuclear-armed, U.S.-supplied Tomahawk cruise missiles on its Dolphin-class submarines in the Indian Ocean. And the Zionist regime also possesses chemical and biological weapons in abundance. Israel’s U.S.-supplied F-16s are specially designed for chemical and biological payloads.

The Zionist regime provides the real impetus for the development of weapons of mass destruction and constitutes an acute threat to peace and stability in the World, is a serious impediment to nuclear disarmament and non-proliferation and is a potential nuclear flashpoint.

America, Israel and Kissinger all know it very well. So, where is the real rub? Where is the threat?

Actually, what Kissinger tries to camouflage is the fact that if Islamic Republic persists in mastering uranium enrichment cycle, it may encourage Egypt, Saudi Arabia and Turkey to defy the United States and develop nuclear technology as well. When and if these nations have nuclear technology, Israel’s hegemony would come to an end. This is not at all a threat to the world, as averred by Kissinger, but a clear and obvious threat to Israel’s hegemony in the region.

This is the real nightmare for the United States and for its colonial outpost, Israel. This not about proliferation; it’s about the Zionist regime and the potential dangers it may face in future.