Audio: Iraq Veterans Against the War Make their Point Heard 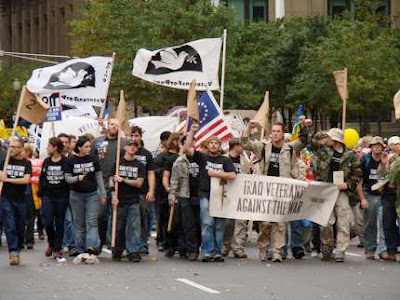 Members of Iraq Veterans Against the War are showing the City of Denver what it's like to be occupied by a foreign military force. They're using street theatre to educate Americans on some of the realities surrounding US troop presents in Iraq. The group is wrapping up three days of demonstrations during the Democratic National Convention, where they have now teamed up with Rage Against the Machine, and have staged a massive anti-war march to the Pepsi Center today. FSRN's Blake Wesley has the story.

Click here for Wednesday's newscast.
http://www.fsrn.org/content/iraq-veterans-against-war-make-their-point-heard/3144
Posted by Alex Constantine at 6:05 AM