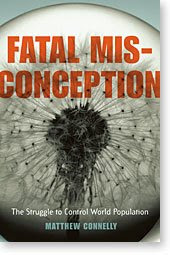 Part I: Power, Money, and Science Unite to Exterminate the World's Poor
www.lifesitenews.com

NEW YORK, NY, July 10, 2008 (C-FAM) - A book recently published by Harvard University Press explains how eugenics united some of the richest and most powerful elites of the twentieth century into a movement "to remake humanity by controlling the population of the world," answering to no one and bringing untold misery upon the world's poor.

The book, Fatal Misconception: The Struggle to Control World Population, was written by Columbia University historian Matthew Connelly and shows why today's reproductive rights advocates are "faithfully reciting a eugenic catechism without the faintest idea where it comes from or where it can lead."

In 1952, at a secret, invitation-only gathering in Colonial Williamsburg, John D. Rockefeller III brought together what would become the modern population control establishment. Setting the agenda for the following decades were the heads of the United States Atomic Energy Commission, National Academy of Sciences, and top scientists "from embryology to economics," including past and present Nobel Prize winners.

From verbatim transcripts of the "Conference on Population Problems," just one of the countless number of such meetings the book exposes, Connelly found that what drove them were the questions of how many people the world could hold along with "whether 'industrial development should be withheld' from poor, agrarian countries like India." By decreasing mortality and encouraging "breeding," development would increase inferior populations and further degrade "the genetic quality of the human race." They decided radical measures to reduce birthrates were justified in order to save "Western Civilization" from being dragged down by the growing humanitarian demands of Third World countries.

Thus was born the Population Council, which would in turn become the nexus of the entire population control movement, going on to coordinate the work of the United Nations, the Ford and Rockefeller foundations, International Planned Parenthood Federation (IPPF) - founded three weeks later - as well as major pharmaceutical firms.

The founder of IPPF, Margaret Sanger, selected for its first director general the psychologist C. P. Blacker, who called for a strategy of "crypto-eugenics," saying "you seek to fulfill the aims of eugenics without disclosing what you are really aiming at and without mentioning the word."

When Nehru presented India's first population-limitation policy in December 1952, the population establishment found a willing government that would allow them to start experimenting on its people to find a cheap contraceptive "to be used in poverty stricken slums, jungles and among the most ignorant people," as Margaret Sanger put it. Years later, Planned Parenthood would import the experiments back into poor neighborhoods in the United States. Sanger said, "I believe that now, immediately there should be national sterilization for certain dysgenic types of our population who are being encouraged to breed and would die out were the government not feeding them."

According to Connelly, it wasn't until President Lyndon Johnson, prodded by a few highly influential advisors, that American funding soared, turning Sanger's vision of forcing birth control on the world's poor into reality in India and beyond. As the initiatives gained unstoppable momentum, the brutal consequences shocked even the most enthusiastic population controllers.

NEW YORK, July 17, 2008 (C-FAM) - In the new book Fatal Misconception: The Struggle to Control World Population, Columbia University historian Matthew Connelly shows how the population control movement created "future projections as evidence" of overpopulation, then justified "casualties" in the war on population caused by coercive methods. These included such "shock attacks" as quotas for millions of shoddy vasectomies and IUD insertions without follow-up care, public humiliation of poor families with three or more children, bulldozing entire neighborhoods that displaced countless thousands of the poor, and knowingly unloading defective IUDs that crippled poor women.

According to Connelly, when Malthusian theories used to justify eugenics fell out of favor, population controllers invented new theories. Founding members of the US Agency for International Development (USAID) returning from the Vietnam War, transferred the counterinsurgency tactic of "population control" to USAID's strategy. Chinese missile scientist Jian Song used computer generated modeling to create the appearance of "precise forecast" of disaster for China if the government did not limit women to bearing one child.

Africa, along with India, was the target of many such contrived scenarios, even though according to Connelly "the continent was a net food exporter and featured some of the lowest rates of growth in the world." What's more, he says family planning advocates ignored the fact that fertility was already falling in China and in other target countries, and ignored the "accumulating body of evidence showing that high fertility was not, after all, correlated with poverty." He demonstrates that fertility rates fell in developing countries between 1950 and 2000, whether or not they were subjected to population assistance programs.

Despite the facts, the movement's tactics became increasingly coercive in the late 1960s, due to the zeal and connections of people like U.S. Army general William Draper. Working with John D. Rockefeller, Draper helped convince President Johnson to include population control in the 1965 "war on poverty." Johnson tied humanitarian aid to developing nations' achieving fertility benchmarks set by the UN and USAID, even vetoing food aid shipments to India in the midst of its dire famines.

Draper founded the Population Crisis Committee, today's Population Action International, with the goal of creating an American public sense of urgency by tapping into the fears of the day, such as drawing a causative link between the lack of family planning in the slums with the chaos caused by youth in the late 1960s and calling for a "crash program for population stabilization."

Along with former Secretary of Defense and World Bank President Robert McNamara, Draper convinced Congress to earmark unprecedented levels of funding for USAID population programs between 1967 and 1971. So much money flooded into the International Planned Parenthood Federation (IPPF) that officials did not know how to spend it. This, along with growing skepticism in the third world of U.S. backing - then 90 percent of the total - led Draper to call for the creation of a fund centered at the UN which would "sanitize" U.S. funding, give the appearance of international consensus, and circumvent national governments. The initiative became the UN Population Fund (UNFPA).

July 24, 2008 (C-FAM) - A new book by Columbia University professor Matthew Connelly documents the way the "reproductive rights" leaders at the UN Population Fund (UNFPA) and International Planned Parenthood Federation (IPPF) rose to power by exposing the abuses of the population control movement, but then supported even larger and more coercive programs.

In 1973, twenty years after formally establishing global population control, the movement's leaders believed it was spinning beyond their control. In response to bad press about out-of-control sterilization campaigns in India and elsewhere followed by a groundswell of popular backlash, John D. Rockefeller was persuaded to re-brand the movement from a "war" on population to a campaign for women's rights. Likewise, General William Draper's Population Crisis Committee sponsored the "feminist unity" platform at the 1974 World Population Conference in Bucharest.

In Connelly's view, "reproductive rights" advocates exploited protests against population control beginning with the Bucharest conference and managed to gradually take over the movement by the time of the UN's 1994 population conference in Cairo. Connelly believes the feminist focus on abortion rights essentially returned the movement to Margaret Sanger's original vision of eugenics, which maintained that poor women needed government-funded birth control and abortion because they could not be left alone to make their own choices about fertility.

According to Connelly, it is for this reason that UNFPA and IPPF supported China's one child policy "with eyes wide open" from its inception in 1980.

"As the IPPF and UNFPA stepped up support, China's program became ever more coercive," he says, citing eyewitness reports of women "handcuffed, tied with ropes or placed in pig baskets," while "every day hundreds of fetuses arrive[d] in the morgue."

IPPF officials, "untroubled" by the reports, reassured donors that Chinese government policies were not compulsory, even during a campaign that resulted - in 1983 alone - in 16 million women and 4 million men undergoing mandatory sterilization, 18 million IUD insertions (required for all mothers) and 14 million abortions of "unauthorized pregnancies." Connelly says IPPF and UNFPA did not even issue "a pro forma injunction to avoid coercion - something that was standard in previous campaigns," and senior UNFPA staff argued against "too narrow an interpretation of voluntarism."

That same year, UNFPA awarded the architect of the one child program, Soviet-trained army general Xinzhong Qian, its first Population Award. Indira Gandhi, whose reelection as India's prime minister was thwarted by a populace outraged over her government's abusive population policies, was the co-winner. UN Secretary General Perez de Cuellar offered them his "deep appreciation" for "marshal[ing] the resources necessary to implement population policies on a massive scale."

Connelly concludes that the entire population control movement was not just brutal but unnecessary, since fertility rates have fallen equally in countries with or without population programs. He wrote the book in hopes that his account of the world's first transnational movement will make readers skeptical of other global governance movements. Unaccountable to people, he says, they too can bring great human suffering in the name of making the world a better place.