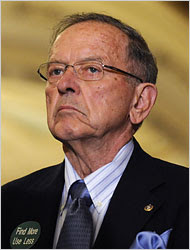 Senator Ted Stevens of Alaska won the Republican primary in his home state on Tuesday, soundly defeating six Republican challengers less than a month after he was indicted by a federal grand jury for concealing more than $250,000 in gifts from an oil services company.

The victory for Mr. Stevens, 84, means he now moves to a tough general election campaign against Mayor Mark Begich of Anchorage, who easily won the Democratic primary on Tuesday and leads the senator in polls. Mr. Stevens enters the general election also having to prepare for his trial, which is scheduled to begin in late September.

Mr. Stevens, who has been in office for 40 years and is revered for bringing home billions of dollars in federal spending, had received 63 percent of the vote with 61 percent of precincts counted.

"People have been voting for Ted for 40 years and their inclination is to keep doing it," Dave Cuddy, a former state lawmaker who finished a distant second to Mr. Stevens, said in a phone interview several hours before the polls closed. ...

Full story
Posted by Alex Constantine at 5:59 AM