The CIA and the AQ Khan Nuclear Network

Caveat: The NY Times story detailed below, although generally consistent with earlier leaks pertaining to CIA involvement with the AQ Khan nuclear black market net, is based on unnamed domestic intelligence sources. This appears to be a limited hang-out that baits the hook with the CIA's destruction of evidence, and quietly slips in the illicit sale of nuclear materials to Iran, thereby giving substance to GW Bush's puffy-chested vagaries - these remain to be proven and there is scant evidence for them apart from the word of the Times' intelligence "sources." Missing in this story are connections that blow back to the Bush State Department, particularly in Turkey.
- AC 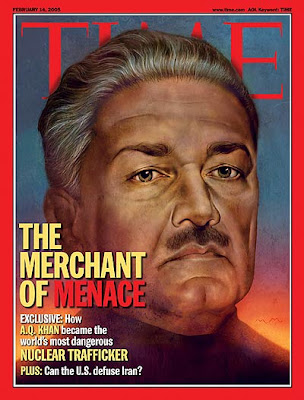 Under pressure from the CIA, the Swiss government destroyed thousands of documents that would have revealed the CIA's relations with a family a Swiss engineers, Friedrich Tinner and his two sons, who are suspected of supplying Iran and Libya with nuclear technology, The New York Times reported. Last May, when the Swiss president announced the documents' destruction, he claimed that it was to make sure that detailed plans for nuclear weapons never fell into the hands of terrorists. The real explanation, according to US government officials, was that the United States had urged that the files be destroyed in order to conceal ties between the Tinners and the CIA.

"Over four years, several of these officials said, operatives of the CIA paid the Tinners as much as $10 million, some of it delivered in a suitcase stuffed with cash. In return, the Tinners delivered a flow of secret information that helped end Libya's bomb programme, reveal Iran's atomic labours and, ultimately, undo Dr Khan's nuclear black market."

While efforts to dismantle the Khan network have been widely reported in recent years, The New York Times indicated that the CIA was also in effect making use of the network in an effort to undermine the targeted nuclear programmes.

"The Tinners played an important role in a clandestine American operation to funnel sabotaged nuclear equipment to Libya and Iran, a major but little-known element of the efforts to slow their nuclear progress.

"The relationship with the Tinners 'was very significant,' said Gary S Samore, who ran the National Security Council's nonproliferation office when the operation began. 'That's where we got the first indications that Iran had acquired centrifuges,' which enrich uranium for nuclear fuel."

"The sabotage first came to light, diplomats and officials said, when inspectors from the International Atomic Energy Agency traveled to Iran and Libya in 2003 and 2004 and discovered identical vacuum pumps that had been damaged cleverly so that they looked perfectly fine but failed to operate properly. They traced the route of the defective parts from Pfeiffer Vacuum in Germany to the Los Alamos National Laboratory in New Mexico, the birthplace of the bomb. There, according to a European official who studied the case, nuclear experts had made sure the pumps 'wouldn't work.'

"A more serious disruption involved a power supply shipped to Iran from Turkey, where Dr Khan's network did business with two makers of industrial control equipment.

"The Iranians installed the power supply at their uranium enrichment plant at Natanz. But in early 2006, it failed, causing 50 centrifuges to explode - a serious, if temporary, setback to Iran's efforts to master the manufacture of nuclear fuel, the hardest part of building a bomb."