Re Project Anthrax & the Cover-Up - Stephen Hatfill, the Selous Scouts & the Previous Anthrax Mailings in Rhodesia/Zimbabwe 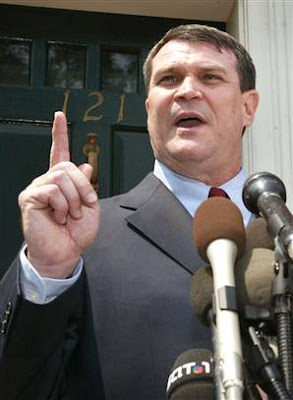 This letter from "A Rhodesian" is angry - but that's fine, because it's over an issue that I was aware of and have been meaning to explain. Actually, I understand the writer's rage and would feel the same way in his place - that is, if I also adopted a position of knee-jerk denial concerning Stephen Hatfill's checkered residence in Rhodesia:

"Steven Hatfill was never in the Rhodesian SAS you can go to their website and you will see his name in the roll of dishonour. ... Get your facts right before bursting into print with absolute nonsense." - A Rhodesian

As explained in "Project Anthrax & the Cover-Up," Hatfill WAS in Rhodesia and worked in academia - these details in his resumé were not fabricated and they have been confirmed by the NY Times - sent there on the recommendation of a neo-Nazi. Hatfill boasted that he ran with the Selous Scouts, who were, according to all evidence, responsible for maiing anthrax spores to black areas in Zimbabwe, leading to an outbreak that was devastating to BLACKS exclusively. The SS denies any connection to Hatfill - but they also deny participation in the anthrax outbreak and many other atrocities.

This is not the reason why I'm certain that Hatfill was telling the partial truth, however - one of whom wrote to inform me directly that he doesn't remember a Stephen Hatfill.

I don't doubt it. Hatfill worked in labs on bio-chemical and medical projects, as he did later at Ft. Detrick, and there was no reason for him to have any contact whatsoever with foot soldiers. The SS vets who disavow knowing Hatfill are telling the truth.

Example: Why should James Bond necessarily have personal knowledge of the lab technicians who concocted his sleeping-gas cologne?

The sensitivity of his work ensured that he kept it under wraps and spun cover stories, told half-truths.

Please consider, as I did in writing the story: It is far too "coincidental" that Hatfill, who WAS in the area where the first round of anthrax mailing occurred in Africa, should move on to an identical mass murder scenario in the US. ... and have no role in either.

Hatfill was telling the partial truth about his "work" in Rhodesia. But he couldn't very well talk about his participation in prior anthrax mailings, could he? So he slanted a few facts, and this strikes me as far more plausible than the insistence of Rhodesian operatives that he wasn't one of them. Hatfill was a lab tech, so they had no reason to deal with him directly.