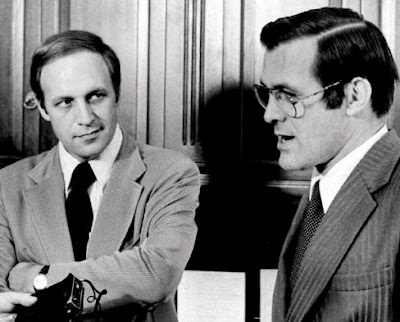 Dick Cheney was an assistant at the White House when Watergate was unfolding. By the time the scandal forced Richard Nixon to resign the presidency in 1974, the young Wyoming Republican had returned to the private sector. The new president, Gerald Ford, called him back. Cheney became deputy to Chief of Staff Donald Rumsfeld, seen here on right when the two were named on Nov. 7, 1975. And when Rummy left (to run the Pentagon, but that's another story), Ford promoted Cheney. At 34, Richard Bruce Cheney became the youngest person ever to serve as White House chief of staff.

In his new book "The Way of the World," author Ron Suskind argues that Cheney concluded from his perch at the White House during those years that Nixon fell not because of his abuse of government -- he asked agencies such as the IRS and the FBI to shadow his enemies. Or because of the break-in of the Watergate offices of the Democratic National Committee by criminals with ties to CREEP (The Committee To Re-Elect the President). Or even because of the cover-up.

Suskind believes Cheney concluded that Nixon had been "overbriefed" and that his aides had failed to give him "plausible deniability." And so, a la Suskind, that is what Cheney set out to give George W. Bush.

Asked about it last night on Keith Olberman's "Countdown" on MSNBC, John Dean, White House counsel in the Nixon presidency, said Cheney has been so successful at this that it will prevent impeachment proceedings against Bush.

"Cheney's been very effective in setting up his deniability and always being the failsafe for Bush. Unless they start waterboarding the vice president, which it not too likely, he is the man, the trail ends right there."

Dean, the one who told Nixon there was "a cancer on the presidency," was convicted of obstruction of justice and admitted supervising hush payments to the break-in defendants. The author of a book called "Worse Than Watergate," Dean argues that the sins of the earlier Nixon era "didn't kill anyone," whereas those of the current administration include torture and war.