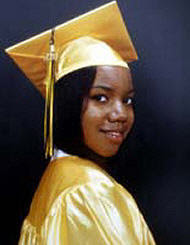 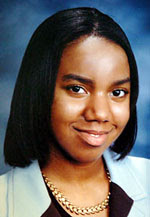 (FinalCall.com) - The U.S. Army says it was a suicide resulting from a self-inflicted gunshot wound to the head from an M-16. The parents say it was murder.

U.S. Army Private First Class LaVena Johnson was found dead on a military base in Balad, Iraq on July 18, 2005 just a few days before her 20th birthday.

LaVena’s mother Linda said she was always against her daughter going to the military, but since she was in charge of telecommunications for her unit in Iraq, LaVena was able to call her parents just about every day and that would ease her mind, hearing her daughter’s voice.

“It was a pain that hit my heart that has not gone away,” Mrs. Johnson told The Final Call as she described the scene at 7:30 a.m. on July 19, 2005 when she first heard that her daughter was dead. Mrs. Johnson does not believe her daughter committed suicide.

“There’s no way that my daughter would have done that to herself, she loved life, she had dreams and hopes and plans, she loved her family.”

The details of her daughter’s death have been gradually told to Mrs. Johnson by her husband John Johnson in order to ease the pain. She was just recently told one of the most graphic details in the case—that her daughter was set on fire.

“It was like her death all over again to know that my sweet baby was laying somewhere with no one to help her. Being murdered and then set on fire—it was the worst most horrific thing I have ever heard,” said Mrs. Johnson fighting back tears. “We were making plans to be together, and she was making plans to do things with her family.”

“On her 20th birthday, I was looking at my daughter in a box,” said Mrs. Johnson. “We should have been celebrating her life, but it was stolen from her.”

Mr. Johnson, LaVena’s father, who holds a Ph.D. in psychology and has 25 years of experience as an administrator working for the Army in a civilian administrative capacity, said every time his daughter called, he would speak to her first so that he could check out her state of mind. In his years working with the military, he is trained to identify soldiers with suicidal thoughts, and he said his daughter did not display any of the symptoms typical of one preparing to take their own life.

“My daughter was a very strong person. When she went through basic training, her drill sergeants talked about how mentally tough she was. In addition to that, she came from a supportive and close-knit family,” Mr. Johnson told The Final Call.

Mr. Johnson described the difficulty he had in obtaining information germane to the investigation of his daughter’s death. When he first tried to get the CD of the images of his daughter, the Army said there were names present and the CD could not be released. Mr. Johnson maintained that as next of kin, he is entitled to those photos. After being told again by the U.S. Army that he was not entitled to the photos, Mr. Johnson contacted Rep. William Lacy Clay who was involved in Congressional hearings looking into the cases of Cpl. Pat Tillman and Pfc. Jessica Lynch.

Pat Tillman was an NFL football player who left a lucrative career in sports, enlisted in the Army and was sent to fight in Afghanistan. When he was killed in April of 2004, Mr. Tillman’s family was told by U.S. Army officials that he was killed by enemy fire in a heroic battle in the mountains of Afghanistan. It was later revealed that he was killed by friendly fire and Mr. Tillman’s family uncovered evidence of a deliberate pattern of misinformation, disinformation and deception on the part of the U.S. Army. In the case of Pfc. Jessica Lynch, in March 2003 she was wounded and captured but “rescued” in a special operation conducted by U.S. forces. Pfc. Lynch herself, many news media outlets and critics of the war have accused the United States of making up the story in order to shape public opinion with the goal of increasing support for the war.

Rep. Clay brought up the case of LaVena Johnson in the congressional hearings on national television and about 45 days later, Mr. Johnson said he received the CD.

Mr. Johnson described in graphic detail the photographs of the tortured and defiled body of his daughter.

The photographs showed that she had been struck in the face with a blunt object repeatedly, shattering most of her teeth and knocking others backward.

“Her lip was busted, her nose was broke from right to left and concaved, her teeth were knocked loose and she had a cracked mandible,” said Mr. Johnson.

There were numerous bruises scratch marks and even what appeared to be teeth mark on her upper torso. There were burns on the right side of her back as well as her right hand. The family believes she was raped as a result of massive bruises and lacerations to her vaginal area.

“We have a picture of her vaginal area, and her vaginal area is tore all to hell,” said Mr. Johnson. “Part of the wall is hanging out, so this was a cruel and vicious rape. In addition somebody poured what appeared to be lye into her vagina and we think they did that to destroy DNA evidence.”

Initially, Mr. Johnson was told that his daughter was found dead in her barracks with a gunshot to the head by the casualty non-commissioned officer from the Army who was dispatched to assist with the funeral arrangements. A friend of his e-mailed some contacts in Iraq who immediately received a response telling him that she was found dead in a contractor’s tent.

Lt. Col. Anne Edgecomb, a spokesperson for the U.S. Army said there are currently 12,500 female active duty soldiers deployed primarily in Iraq and Afghanistan out of the 125,800 soldiers currently deployed. Lt.Col. Edgecomb said the case of Pfc. LaVena Johnson was thoroughly investigated by the U.S. Army’s Criminal Investigation Command (CID) and is considered closed.

Andre Banks, deputy director of ColorOfChange.org has joined on to draw attention to the case. He called the details of the case “horrifying, brutal and deeply saddening.”

“When you hear about what her parents have had to face after her death, after this terrible thing has happened, something that is almost incomprehensible. To think that someone who has put their life on the line for their country, then their parents have to spend years of delays and denials just to get a clear answer about why and how their daughter died,” said Mr. Banks adding that ColorOfChange.org has in just two-weeks of internet activism gathered 50,000 signatures demanding congressional investigations into the growing problem of women in the military being raped and killed.

“What we know for sure is that the answers the Johnson’s are being given are clearly insufficient,” said Mr. Banks. “Literally everything from the Army’s own investigators shows that a suicide is highly unlikely if not impossible, and we also know that LaVena’s case is not singular, it is actually connected to a pattern of other rape-murder cases involving women in the military that are either brushed to the side or covered up,” he added.

According to Mr. Banks and Mr. Johnson, they are generally hopeful and have seen favorable signs that Rep. Henry Waxman, chair of the Committee on Oversight and Government Reform will use the authority of his committee to conduct a thorough investigation into this particular case, and the issue of sexual abuse and assault against female soldiers in the military. Calls placed to Rep. Waxman’s office were not returned by Final Call press time.

The Department of Defense has admitted that sexual assault is the most underreported crime in the military. According to their “Report on Sexual Assault in the Military,” of the 1,441 completed investigations of sexual assault in fiscal year 2007, over half (724) involved perpetrators who were members of the U.S. Army. This was by far the highest of the four armed service divisions which include the Navy, Air Force, and Marines. In those 1,441 cases, 1,308 of the victims were female.

The Department of Defense has established nationwide and international hotlines to deal with reporting incidents of sexual assault including a Sexual Assault Response Coordinator (SARC), a position established to coordinate care for sexual assault victims. Once a sexual assault is reported the SARC assigns a Victim Advocate to assist the victim in obtaining the necessary medical, psychological and emotional support either through intervention or referral. The Victim Advocate also is available to accompany the victim to any investigative interviews, medical examinations and follow-up appointments.

Experts say that this particular incident is representative of a larger problem of sexual abuse—including rape—of female members of United States Armed Forces. Some have even said reports of sexual abuse against female soldiers are ignored and in many cases, unpunished.

“That a female soldier in Iraq is more likely to be raped by a fellow soldier than killed by enemy fire is sickening,” said Rep. Jane Harman (D-Calif.), chair of the Homeland Security Intelligence Subcommittee. “This crisis has reached epidemic proportions and threatens our national security. Better training and rigorous prosecutions are needed to make clear to soldiers, and the command structure, that bright red lines have been drawn.”

Capt. Carl Redding, public affairs officer for the Media Relations Department of the United States Marine Corps told The Final Call that they place a high level of importance on the safety of all female soldiers. Cases of sexual harassment, assault and abuse are taken very seriously and once an incident is reported, USMC officials immediately launch an investigation and there is no delay.

“We tell all of our Marines that sexual assault is not compatible with Marine Corps standards it is not compatible with our core values and will not be tolerated,” Capt. Redding said in a telephone interview from his office at the Pentagon. He also said sleeping areas are separate for male and female members of the USMC and there is no fraternization between male and female soldiers especially in combat forward positions.

On July 18, 2008 in an appearance before U.S. Congress in Washington D.C., the Johnson’s called for a full investigation by the House Oversight and Government Reform committee into the death of their daughter.

Mrs. Johnson said the memory of her daughter’s precious smile will always stay with her, giving her quiet courage and strength to continue to fight for justice.

“She would try to reassure me that being there right on the base that she would be okay, but she was in a place with a bunch of Satanic predators that wore the same uniform that she did,” said Mrs. Johnson adding that she would not advise any females to join the military. She plans to continue to speak out.

“It is painful to do, but I have to do what I have to do because they took her voice and silenced it so I have to speak for her and for all the other young ladies that have been taken away in such a cruel and horrible way,” she said.

Mr. Johnson also agreed to continue to uncover the truth in this case.

“Something hideous has happened,” said Mr. Johnson. “Somebody committed cold-blooded murder, and we want them brought to justice.”

(For more information regarding the LaVena Johnson case, visit www.lavenajohnson.com.)