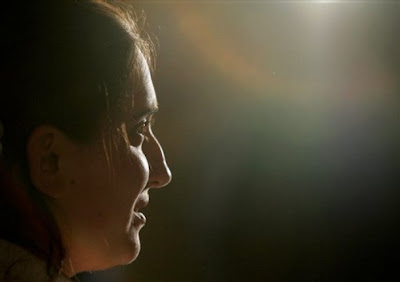 Macarena Gelman speaks to the press after making an appeal to Uruguay's courts to reopen a criminal investigation into the kidnapping and disappearance of her mother during Uruguay's 1973-1985 military dictatorship in Montevideo, Wednesday, Feb. 27, 2008. Gelman is the daughter of Argentine activist Maria Claudia Garcia, who was arrested in 1976 in Argentina and transferred to Uruguay when she went missing. Gelman's father, Marcelo Gelman, was assassinated in 1976 in Argentina and his remains were found in 1989.

The case was closed October 2005 when the attorney general tied it to the Expiry Law that forbade trying ex military and policemen that perpetrated crimes against humanity during the 1973-1985 dictatorship.

Maria Claudia Garcia and husband Marcelo Gelman were kidnapped in Buenos Aires in August 1976 and jailed at the renowned prison and torture center Automotores Orletti.

Marcelo was slain and his body plunged into the Tigre River into a barrel, while Maria Claudia was transferred to the Defense Information Service headquarters in Uruguay.

She gave birth to daughter Macarena, who was adopted by the family of an Uruguayan policeman until her grandfather Juan found her in the year 2000, at age 23.