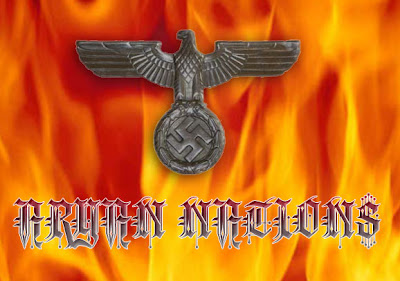 " ... Sources say he was wearing a ring with a swastika. ..." " ... The three belonged to the white supremacist group Aryan Nation, said Victor Ross, police chief in Glendale, a suburb of Denver ... "

A Denver TV station is reporting authorities may have foiled an assassination plot against Barack Obama, and there's talk the suspects may be members of a white supremacy group.

KUSA-TV claims three men are in custody after a routine traffic stop in Aurora (near Denver) turned up two rifles, high-powered scopes, ammo and meth. The man in the car led authorities to a hotel where another suspect jumped out of a fourth floor window in an attempt to escape. ...

E-mail DENVER (CBS4) ― CBS4 has now learned at least four people are under arrest in connection with a possible plot to kill Barack Obama at his Thursday night acceptance speech in Denver. All are being held on either drug or weapons charges.

CBS4 Investigator Brian Maass reported one of the suspects told authorities they were "going to shoot Obama from a high vantage point using a ... rifle … sighted at 750 yards."

Law enforcement sources tell Maass that one of the suspects "was directly asked if they had come to Denver to kill Obama. He responded in the affirmative."

The story began emerging Sunday morning when Aurora police arrested 28-year-old Tharin Gartrell. He was driving a rented pickup truck in an erratic manner according to sources.

Sources told CBS4 police found two high-powered, scoped rifles in the car along with camouflage clothing, walkie-talkies, a bulletproof vest, a spotting scope, licenses in the names of other people and methamphetamine. One of the rifles is listed as stolen from Kansas.

Subsequently authorities went to the Cherry Creek Hotel to contact an associate of Gartrell's. But that man, who was wanted on numerous warrants, jumped out of a sixth floor hotel window. Law enforcement sources say the man broke an ankle in the fall and was captured moments later. Sources say he was wearing a ring with a swastika, and is thought to have ties to white supremacist organizations.

A third man -- an associate of Gartrell and the hotel jumper was also arrested. He told authorities that the two men "planned to kill Barack Obama at his acceptance speech."

That man, along with a woman, are also under arrest.

The Secret Service, FBI, ATF and the joint terrorism task force are all investigating the alleged plot.

The U.S. Attorney in Denver has scheduled a news conference for Tuesday afternoon.

CBS4 will have new details on this developing story at 10pm.

... The three belonged to the white supremacist group Aryan Nation, said Victor Ross, police chief in Glendale, a suburb of Denver where one of the suspects was arrested. The other two were arrested in Aurora, another suburb.

"We don't usually have that number of Aryan Nation people here,'' Ross said. "It was suspicious to us. We turned everything over to the federal authorities.''

FBI spokeswoman Kathleen Wright said federal authorities had opened a drugs and weapons investigation in connection with the arrests. The U.S. attorney's office in Denver said in a brief statement that federal charges were anticipated.

He added: "We're absolutely confident there is no credible threat to the candidate, the Democratic National Convention, or the people of Colorado.''

The rifle with a scope was reported stolen from Goodland, Kansas, Dudley said. The rifles were found along with a quantity of methamphetamines in the rental truck, which had not been leased to the driver, Dudley said.

Dudley said none of the three suspects in custody had a fixed home address, which was ``another cause for alarm.'' One was being held on outstanding warrants with bond worth more than $1 million.

The incident was the second this month involving a threat to Obama, who is seeking to become the first black president.

Raymond Hunter Geisel, 22, was arrested in Miami Aug. 2 and charged with threatening to kill Obama, according to the U.S. Secret Service and court records. Geisel allegedly made the threat during a class he was taking to become a bail bondsman, and a search of his truck and his hotel room turned up weapons.

Obama has been receiving Secret Service protection since May 2007, the earliest date that any presidential candidate has gotten a security detail since the practice was instituted following the 1968 assassination of Senator Robert F. Kennedy.