US Accused of Backing Terrorism in Pakistan 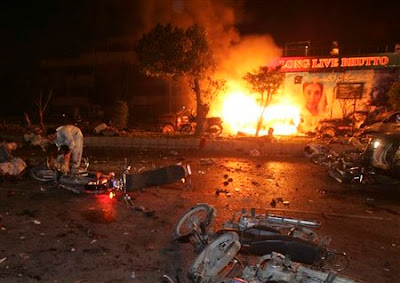 Pakistan has accused the US of backing militancy within the country, saying this goes against the grain of the Washington-led global war against terror.

The visit of the Chairman Joint Chiefs of Staff Admiral Michael Mullen and CIA Deputy Director Stephen R. Kappes, "carrying what were seen as India-influenced intelligence inputs had hardened the resolve of Pakistan's security establishment to keep supreme Pakistan's national security interest even if it meant straining ties with the US and NATO", the newspaper said.

It quoted a senior official with direct knowledge of the meetings as saying that Pakistan's military leadership and the president asked the American visitors "not to distinguish between a terrorist for the United States and Afghanistan and a terrorist for Pakistan".

"For reasons best known to Langley, the CIA headquarters, as well as the Pentagon, Pakistani officials say the Americans were not interested in disrupting the Kabul-based fountainhead of terrorism in Balochistan nor do they want to allocate the marvellous Predator (unmanned armed aerial combat vehicle) resource to neutralise the kingpin of suicide bombings against the Pakistani military establishment now hiding near the Pakistan-Afghan border," The News said.

During the meetings, the US officials were also asked why the CIA-run Predators and the US military did not swing into action when they were provided the exact location of tribal leader Baitullah Mehsud, "Pakistan's enemy number one and the mastermind of almost every suicide operation against the Pakistan Army and the ISI since June 2006", the newspaper added.

One such precise piece of information was made available to the CIA May 24 when Mehsud drove to a remote South Waziristan mountain post in his Toyota Land Cruiser to address the media and returned to his safe abode.

"The United States military has the capacity to direct a missile to a precise location at very short notice as it has done close to 20 times in the last few years to hit Al Qaeda targets inside Pakistan," The News noted.

Pakistani officials, according to the newspaper, "have long been intrigued by the presence of highly encrypted communications gear with Mehsud. This communication gear enables him to collect real-time information on Pakistani troop movements from an unidentified foreign source without being intercepted by Pakistani intelligence".

Mullen and the CIA official were in Pakistan on an unannounced visit July 12 to present what the US media claimed was evidence of the ISI's ties with Taliban commander Maulana Sirajuddin Haqqani and the alleged involvement of Pakistani agents in the bombing of the Indian embassy in Kabul.

"Pakistani military leaders rubbished the American information and evidence on the Kabul bombing but provided some rationale for keeping a window open with Haqqani, just as the British government had decided to open talks with some Taliban leaders in southern Afghanistan last year," The News said.

http://www.hindustantimes.com/StoryPage/StoryPage.aspx?sectionName=&id=95c61181-205b-4c33-8c29-01d3161e8786&&Headline=US+accused+of+backing+terrorism+in+Pak&strParent=strParentID
Posted by Alex Constantine at 11:47 AM