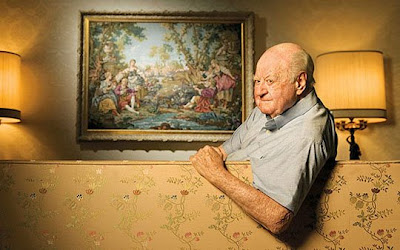 It was Robert Graves who claimed that few are wholly dead. Blow on a dead man’s embers, he said, and a live flame will start. If this is so, I fancy that after the death, at 90, of Robert Aime Maheu in Las Vegas earlier this month, his embers are feeling the draft from a great many people who’d like to ignite a small flame of truth and enlightenment under this charming, enigmatic and rascally wheeler-dealer’s life.

Some people will remember him as Howard Hughes’ point man in Las Vegas.
Others may recall that he was the man the CIA enlisted to run Las Vegas villain Johnny Rosselli and the Mafia hit team in the plot to assassinate Fidel Castro -– a scheme abandoned by the Kennedy duo after the failure of the Bay of Pigs invasion.

But if the plot had gone ahead, and anything had gone wrong, Maheu admitted he would have been ‘the fall guy, caught between protecting the government and protecting the mob, two armed camps that could crush me like a bug.’

If it was a remark that defined the very essence of being caught between a rock and a hard place, it also described Maheu’s equivocal position in almost everything in which he was involved.

I first encountered Maheu in the early 1980s, while researching my biography of Aristotle Onassis: Ari. I knew that the curiously cherubic spook, a man of charm and guile, and with a wicked sense of humor, and more connections than the internet, had been at the heart of the plot that, in 1954, had destroyed Onassis’s fabled Jiddah Agreement with Saudi Arabia.

The Agreement possessed all the ingredients that exhilarated Onassis:
cunning, audacity, imagination, and considerable mischief. It called for Onassis to supply five hundred thousand tons of tanker shipping toward the establishment of the Saudi Arabian Maritime Company, or SAMCO.

Headquartered in Jiddah, but exempt from Saudi taxes, the fleet would fly the national flag, its officers drawn from a Saudi maritime college to be established and funded by Onassis.

The company would get priority rights on the shipment of Arabian oil, with a guaranteed 10 percent of the country’s annual output. The profits were potentially massive, the geopolitical implications clearly presageful. For starters, the agreement would have seriously undermined United States influence in the Middle East.

As Onassis told me later: ‘I was about to stick my finger into the American pie’ –- a pie, baked and cut up by ARAMCO, the consortium dominated by four major American companies: Mobil, Exxon, Texaco and Standard Oil – that a State Department official had once called ‘the richest material prize in history.

A former FBI man, Maheu had been in business on his own account for only a few weeks when Niarchos offered him five thousand dollars to scupper the Jiddah deal: ‘Essentially, I was asked to throw a monkey wrench into the works. I didn’t get rich overnight, but I did very well. Five thousand dollars was a lot of money for a private investigator who normally got fifty dollars a day, plus expenses,’ he would recall with a small smile of satisfaction.

Indeed, it was Maheu’s handling of that dirty tricks operation – an international conspiracy that eventually involved Richard Nixon, the CIA, the FBI, shipping magnate Stavros Niarchos (at least one of his companies, Niarchos London, Ltd, later became a CIA proprietary, fronted by former Athens station chief, Al Ulmer), and, Onassis was convinced, his old enemy, Robert Kennedy – that had made him a legend in the CIA, and the first choice to run the Agency plot to kill Castro.

An FBI counterintelligence agent in World War Two, Maheu quit the Bureau in 1947 to go into the dairy business.

He had remained a great admirer of J. Edgar Hoover’s, always remembering to send him a birthday greeting (‘Those of us who truly comprehend the insidious forces which you have consistently and are continuing to combat,’ read one birthday message, ‘thank the Good Lord that He has blessed you with so many years of physical and mental health. We pray that He may continue to do so’), and when the dairy company went sour two years later, the much-blessed director got him a job with the Small Defense Plants Administration in Washington.

In 1954, he launched Robert A. Maheu Associates, which he preferred to describe as a management consultancy business, although most of the associates were ex-FBI and intelligence agents.

From the beginning the CIA was picking up the tab for his office expenses with a five-hundred-dollar monthly retainer. Along the way, he produced a pornographic movie for the CIA, purporting to show Indonesia’s President Sukarno capering with a blonde.

What I didn’t know when I first met Maheu was that a decade after the collapse of the Jiddah Agreement, he had also been involved in another anti-Onassis plot – Prince Rainier’s nifty share-creation scheme that, in one stroke, had cut Onassis’s 52 percent domination of the company that owned Monaco to less than one third.

Nevertheless, Onassis went to his grave believing that Maheu was merely a front for Robert Kennedy, a man he detested and eventually conspired to murder, as I revealed in my second Onassis book, Nemesis.

When I had lunch with Maheu in Las Vegas in 1995, he smiled and smiled and denied any part in the scam to run Onassis out of Monaco. Looking like a Vatican banker who kept an expensive mistress on the Via Sistina, he listened politely as I confronted him with the evidence to the contrary, including an eyewitness account of his meeting with a Niarchos kingpin at the Hotel Hermitage in Monaco in 1967.

‘I wasn’t involved in that business. I wasn’t in Monaco in 1967.’ My eyewitness, he said, ‘saw somebody else … people often think they see me where I am not. I guess it’s part of my mystique,’ he said as if he didn’t expect to be believed, but was too rich, and too old, to let it worry him anyone.