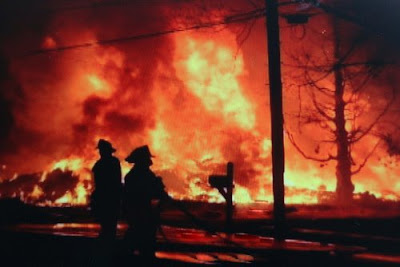 North American media has published the pictures of the cockpit crew at the controls of Continental Flight 3407 when it went down in New York on Feb. 12, killing 50 people. Most prominent in the coverage is the 24-year-old co-pilot and her $23 per hour salary, plus the fact that she supposedly had a second job working in a coffee shop. There you have it. Right there. That’s your guilty party.

The media coverage on the young lady, and the blame-throwing, is relentless, … too young, too underpaid, too inexperienced, too tired, living with her parents, and on top of all that, she flew to her co-piloting shift from Seattle in the cockpit of a red-eye flight, and then had the gall to rest or nap illegally in a crew lounge before taking another flight to Newark where she reported for duty. Why else would she have not noticed the alarm indicating a sudden drop in speed? Why else, other than from exhaustion or incompetence would the pilot, reacting too late with a pull instead of a push on the controls, have conflicted with the plane’s auto-correction system that was attempting to bring the nose down? Boy did they ever mess-up.

Oh, and wait, that’s not all. The pilot failed tests [but later passed them - AC] and lied on his application when he was hired by Colgan Air. He probably earned $55,000 per year like other Colgan Pilots. Well, that’s it then. That confirms it. The cockpit crew was to blame for the crash.

Let’s ignore that there was ice on the windshield and on the leading edge of the wings. It was winter, and planes fly in winter. All kinds of planes, including the Bombardier Dash 8 Q400 twin engine turboprop. The severe weather conditions mean that extra measures of caution and diligence are required on the part of all individuals with any responsibility for putting the plane into the air including ground crews, and control towers.

Regardless the weather or technical conditions, ultimate responsibility for who occupies the two seats at the front of the plane rests in the company executives who make the decisions on who fills them. Experience or lack thereof, talented or not, an employer decided that a 24 year old co-pilot and a 47 year oold pilot, had enough experience and proficiency to safely transport a plane full of travelers to their destinations.

The media’s unsubtle accusations, as it trumpets a 24 years old, including her picture, who held down two jobs to pay the rent, and who was placed in a situation with which she and her partner in the cockpit were unfamiliar, is unconscionable. We are also understandably surprised that anyone flying a passenger plane would only be paid $23 per hour. Do we not all assume that pilots, particularly those responsible for passengers, require wheel barrows to haul their cash home on payday?

The grieving families who lost loved ones on that flight deserve better reporting. Society in general deserves better analysis by the media of a service which has become critical to its daily functioning, but whose financial cutbacks have brought practices of some providers too close to the edge of unsafe, and whose regulators should revisit the application of their rules guiding safe aviation.