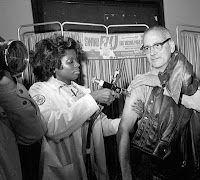 "Public health experts are gearing up for swine flu vaccinations this fall in what could be the largest mass-immunization campaign since the polio vaccine was introduced more than 50 years ago. ... "

Gearing up ... for "Swine flu vaccinations this fall." You might watch out for those fall Swine Flu shots, because there will be ... no licensed vaccine for the pig strain available in the fall: " ... a swine flu vaccine is still being designed, and the World Health Organization reported last week that a licensed version may not be available until the end of the year - weeks after the start of the flu season. An unlicensed vaccine - one that is still being tested but is deemed safe enough for the general public - may be available sooner. ... "

"Safe enough." The mercury in a government-prescribed dosage of the vaccine is 250 times higher than the legal volume for hazardous waste. The vaccine will be mixed with anti-biotics to kill any bacteria that may creep in. "Safe" doesn't apply to the lucrative junk they want to put in our veins, and "enough" is arguable.

The first in line will be voluntary test subjects, since the first round of vaccines will be unlicensed. Is anyone "out there" jockeying for position?