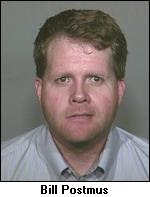 SAN BERNARDINO--Prosecutors have dropped the ‘other shoe’ on former assessor Bill Postmus.

A 10-count complaint has been filed against the one-time Republican leader. The charges include eight felonies ranging from grand theft, perjury and misappropriation of public funds to possession of methemphetamines, ecstasy and drug paraphenelia.

Prosecutor Lewis Cope will be the DA’s trial deputy.

“If Mr. Postmus is convicted on all counts that he is charged with, it is possible that he could serve up to 8-years in state prison.”

Also charged and arrested Tuesday was Gregory Eyler, a former assessor taxpayer advocate. Eyler is accused of not performing public services he was paid for.

The criminal charges are an outgrowth of a Grand Jury investigation and Postmus’ arrest last February at his Rancho Cucamonga townhouse. He is scheduled for arraignment Thursday.

Board of Supervisors Chairman Gary Ovitt said the criminal charges "are an undeserved embarrassment to the county, our dedicated employees, and our fine residents. The charges do, however, validate the county's early efforts to hold Bill Postmus accountable and seek his removal from office."