The Washington Post's Aversion to the Word "Torture" 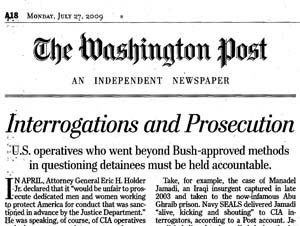 Excerpt from: "The WaPo Takes The Next Step In Condoning Torture"
The Daily Dish
27 Jul 2009

" ... The Washington press corps still refuses to call the Bush techniques torture, adopting the lies of the government as truth, allowed brazen defenses of torture on its op-ed pages, has one columnist, Charles Krauthammer, who has pioneered and championed the torture of prisoners, fired anti-torture columnists like Dan Froomkin, and now want to cast a blessing on the torture program by singling out just a few who went beyond it. So they get the appearance of actually caring about the subject while protecting their friends from any unpleasantness caused by brutally torturing hundreds of prisoners. I mean: how can one invite Don Rumsfeld for a salon at Lally Weymouth's house if he is, gasp, a war criminal? But Rumsfeld is a war criminal, and he should be treated as such in Washington. He isn't. Because he is of their class. Lynndie England, doing what Rumsfeld told her to do? She went to jail. Rummy gets a fat book contract and invites to Washington parties. ... "

http://andrewsullivan.theatlantic.com/the_daily_dish/2009/07/crossing-the-line.html
Posted by Alex Constantine at 6:13 AM