Before Fox News there was GERALD L.K. SMITH - Book Review 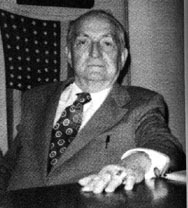 This biography, reprinted ten years after its first publication, is a useful portrait of a nasty fellow. During his long career as a “nationalist,” anti-Communist, anti-Jewish, pro-Christian, “America first” agitator and propagandist, Gerald L.K. Smith was a household name in America — and in some circles quite an influential one.

Nasty though he was, Smith’s life also serves as a reminder that a hate-monger can be, in private, a very kindly, even admirable fellow. Smith was personally courageous, extraordinarily energetic and totally sincere, as well as paranoid, shrilly racist and a liar — a disseminator of total fabrications that he apparently believed with full sincerity as soon as he invented them.

Born in 1898 in rural Wisconsin to hard-working religious parents, Smith chose the Christian ministry as his career at age 12 and never looked back. Much of his fame and influence came as a consequence of his abilities as a public speaker. He was probably the best orator and “rabble-rouser” in American history; H.L. Mencken, who had heard both, judged him superior even to the silver-tongued William Jennings Bryan.

Smith got his start in politics as a member of Louisiana Governor Huey Long’s administration. When Long, whom he loved and admired, was assassinated in 1935, Smith’s power base fell apart. He believed that Franklin Roosevelt was behind the assassination, in order to keep Long from running for president in 1936, and he forever after hated FDR.

After Roosevelt’s reelection in 1936, Smith created his own movement, the Committee of One Million, preaching that the United States was in imminent danger of a Communist revolution. The warning did not seem so far-fetched during the Depression years, and Smith was endorsed by members of Congress and financially supported by such captains of industry as auto magnate Horace Dodge.

Energetic and prolific — a true American success story — Smith raised considerable sums of money through radio talks, direct mail campaigns, book distribution, and personal appearances. (We are lucky that he did not have the sort of long-term organizational talents that build and solidify mass movements.)

All of Smith’s preachments were seasoned with a large dollop of paranoia and demagoguery. He believed, for example, that the Communists were plotting to seal off Manhattan Island by dynamiting its bridges and tunnels, and he circulated a spurious genealogy “tracing” Franklin Roosevelt’s “Jewish” ancestry. An ardent isolationist, he insisted that World War II was being fought only to protect European Jews and to preserve the British Empire.

By 1942 he was blaming the Jews for his failure to win the Republican nomination for Senator in Michigan. In 1943 he created the America First Party in order to “save” white, Christian America. Jesus, he claimed, was not a Jew but a blue-eyed blond who “bore no resemblance whatever to the modern hook-nose shopkeeper, money changer, brothel owner and whiskey peddler.” Hitler, he believed, was being persecuted by the Jews. Six million Jews murdered? Nonsense — they had been illegally admitted to the United States to keep Roosevelt in power. As his anti-Semitism became more shrill, Smith alienated even those mainstream figures who had once supported him.

Nonetheless, he couldn’t understand why, in 1944, no serious candidate for president wanted his support; in fact, each one repudiated it. In 1948, repudiated even by the States’ Rights “Dixiecrats, ” he ran as the candidate of the Christian Nationalist Party on a platform that included white supremacy, deporting blacks and Zionist Jews, and constructing ghettoes for those Jews who remained. The government was controlled by Jews, he railed. Eisenhower was a “Swedish Jew. ” Harry S. Truman’s middle name? Solomon. By the time of the Eichmann trial in Israel, he was speculating that Eichmann, who “looks like a Jew to me, ” was collaborating in a Jewish conspiracy to gain money and sympathy for Israel.

In the last 15 years of his life — he died in 1976 — Smith devoted much of his energy to creating a suitable monument to himself. He settled in the Arkansas town of Eureka Springs and funded the building of a 70-foot-high sculpture, “The Christ of the Ozarks,” visible from three states; an amphitheater to which thousands of tourists still come to watch the story of Jesus acted out; and a museum that displays his private collection of 7,000 Bibles.

Glen Jeansonne’s succeeds, by the careful accumulation of details, to provide a portrait of both the public and the private man. Only the figure of Smith’s wife, and the bond between them, remains elusive.

Overviewing Gerald L.K. Smith’s life, it is a relief to see that many ugly ideas that were respectable, or at least widely held, have now been assigned to the margins of American public life. But it is also edifying to remember that the bad old days are not really all that far in the past.