Commentary: My Mom Is A Torture Loving, Italian/Catholic, Fascist and Fox News Viewer 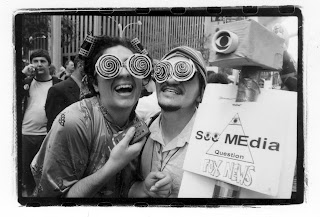 It’s truly stupefying that today, in the midst of the Obama era, that legions of Americans continue to find it so easy to rationalize and doggedly defend the Bush administration’s torture program.

As more details are revealed it’s clear that never before in human history has such a complex system of abduction, international rendition, and judicial and legislative manipulations been employed to advance and empower an extremely narrow yet far reaching political agenda.

Bush and Co. have turned American democracy on its head and redefined political criminality and neo-fascistic hubris while injecting their poison into the minds of untold millions of Americans via a compliant and self-serving media system. They have rendered Orwell’s horrific vision for the future of humanity in ‘1984’, quaint. But above all, what is most astonishing to me is how they have made my 86 year old Italian-Catholic, Jesus loving mother, embrace torturers and denounce Peace Makers.

My two brothers and I used to have a good laugh when my parents would talk about the ‘good’ Mussolini brought to Italy. For my entire adult life, spirited political hyperbole and great food have always been a part of my family’s dinner table experience. ‘Pass the ravioli – the Japs deserved two nuclear bombs!’ ‘How could you say such a thing I thought you believed in Jesus?’

A study released in April by the Pew Research Center for the People and the Press indicates the more often people attend church, the more likely they are to support torture. Sadly, the sobering data supports my own personal struggle growing up in an extremely conservative, Italian Catholic family. I will always remember my parents’ deep-seated belief that the biggest mistake ‘Il Duce’ ever made was aligning himself with Hitler (I think Hitler saw it the other way around) and how amazing my mother’s gnocchi were.

Even in the face of obvious political malfeasance and criminality, my parents always justified the ‘right’ and demonized the ‘left’. Diabolical acts like the bombing of Cambodia or My Lai or the blatant illegal dabblings of Richard Nixon, seemingly antithetical to the 12 years of Catholic education I received were always ‘justifiable’.

Although my mother would never admit it, she probably would grant the benefit of the doubt to the nefarious and twisted ambitions of the Inquisition. Murder and torture in the name of Jesus are ‘A- OK’, as long as the Pope gives his blessings, unless the Pope contradicts the President – then that’s another story. My mother is a truly wonderful and beautiful woman — she is just so profoundly frightened by what she has been told about the world, that her value system has been turned inside out.

My parents were children of Italian immigrants and have been ardent Republicans, defenders of Nixon, detractors of FDR, haters of the Beatles, unions, gays, environmentalism and consumer advocacy. As far as African Americans go, suffice to say that the angst ridden look on my parents’ faces is forever etched in my mind when I told them an African American girl (and Catholic) asked me to her prom and I accepted.

It was the first indication that I was on a different path. Although neither of them completed college, my father (now deceased) and mother were great, committed loving and intelligent parents who encouraged their three sons to aim high and achieve great things. But there was always this ever-present layer of fear based bigotry on their part that tainted our relationship and generated extremely frustrating and painful arguments.

Enrico Romolo Corsini was a proud first generation, Brooklyn born, Italian-American and a WWII and Army Air-Corps veteran. When we argued politics, he would always make me prove my claims. I would say to him, ‘Dad – the Soviet Union lost 20 million people during WWII’ and his classic response would be, ‘Show me where you read that! Who wrote that?…That can’t be true!’ and I would respond angrily, ‘Here it’s in your Encyclopedia Britannica!’ And I would open the volume and read down to the casualties. He was silent, then grumbled. Although it took a lot of effort, God bless his soul, Dad’s ego would succumb to the weight of evidence, albeit grudgingly. My mother is another story altogether. ...

People cannot support torture while claiming to be Christian – they are mutually exclusive. Just like fascism and democracy. Sorry Mom, I love you and your pasta, but you and masses of other right-wingers out there and not the Beatles, homosexuals, Muslims, hippies or rappers, have undermined the footing of American democracy.

You have abandoned your own Christian values of humility, forgiveness and compassion and have empowered craven, greed driven politicians to frighten our nation into submission. It takes far more strength of character to stand for peace, than succumb to war. This is why Jesus was tortured and murdered by people who feared the truth. Fascists all of them!

Robert Corsini is a documentary filmmaker, producer and writer. Born and raised in Los Angeles, a graduate of the University of California, Santa Barbara and a former Peace Corps volunteer in Togo, West Africa. Mr. Corsini has produced television news and various incarnations of ‘reality’ television for nearly twenty years with dozens of national credits with NBC News, Discovery Channel, TLC, PBS and PAX to his name.

Full story: http://pubrecord.org/commentary/2892/torture-loving-italiancatholic/
Posted by Alex Constantine at 6:28 AM