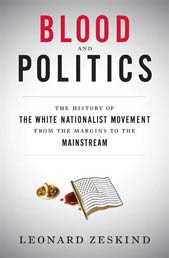 In November 2007, on the weekend after a $5 million one day "moneybomb" for Rep. Ron Paul's presidential bid, I covered a rally for the candidate in Philadelphia and met a student who had come to pass out fliers attacking him. "He's got truly radical views that are being mainstreamed at events like this," said Matt Sullivan, a liberal who was attending Temple University. A largely white crowd brushed him aside; his fliers, which reprinted racist statements about blacks that ran in an old Paul newsletter, were crumpled up.

Two months later, everyone who followed the race learned that Paul's connections to racists had been hidden in plain sight, in many more newsletters and in speaking engagements. In October 2008, Paul spoke at the 50th Anniversary of the John Birch Society.

All of this has been forgotten in the mainstream press, in which Paul is covered as a compelling political eccentric, but I thought of all it while reading Blood and Politics. At one point, Leonard Zeskind recreates a 1983 meeting of "tax protesters" and "Identity Christians" in Kansas who pass around a flier that can inform their neighbors of why their farms are worth ever less and less. It excoriates "Jewish bankers" and names "the real owners" of the Federal Reserve, including the Rothschilds, the Rockefellers, Lehman Brothers, and Goldman Sachs.

Attacks on Paul are characterized as paranoid, obsessive and unfair, as I'm sure Zeskind's book will be characterized. Just this week, The Atlantic's political reporter Marc Ambinder wrote that Republicans suffer from a "double standard" that gives them "much less of a margin for error when it comes to making racially insensitive remarks."

The implication was that conservatives might have a few bad apples in their movement, or that they might make some gaffes in their pursuit, but that their version of racial and economic justice -- an end to racial preferences, tax cuts, school vouchers -- is perfectly legitimate. And Zeskind argues against this. Willis Carto's bigoted Liberty Lobby flourished with Barry Goldwater. Richard Nixon and Ronald Reagan appointed lawyers who chipped away at civil rights. Pat Buchanan "courted [David] Duke's constituency" when he ran for president. Scratch a conservative Republican and you'll find a racist; dust off a Republican idea and you'll find a policy that would elevate the white majority over racial minorities.

This is much further than I'd go, because I know that the Myron Magnets and Charles Murrays who have convinced today's Republicans that, for example, welfare without restrictions has a malicious effect on its recipients, did not do so because they wanted to preserve white privilege. Most bad faith, racially-obsessive policies -- the fear of Mexican immigrants that David Duke used as a recruiting tool three decades before Tom Tancredo -- are adopted by people who are simply worried about their economic well-being and want to find an attackable culprit. So, fear of the shadowy federal reserve, and fear of Sonia Sotomayor's outrageous idea that non-white judges might make wiser decisions in discrimination cases than white judges.

A lot of Zeskind's material is fun and sensational, but not that worrying. Overtly racist, David Duke politics aren't effective in Barack Obama and Bobby Jindal's America, and the list of Aryan or Klan leaders who have imploded or been revealed as undercover agents is longer than the list of active, full-time racists. Zeskind's more controversial thesis should stick with us, though. Conspiracy theories about the "real rulers of the world" and anger at policies that might lift up minorities are very, very easily transmitted into mainstream politics. It's not a "double standard" or an act of political witch-hunting to ask whether a new conservative idea, wrapped up as an appeal to America's founding principles, is actually a throwback to base racism.