IG Farben and the Nazi Origin of Water Fluoridation 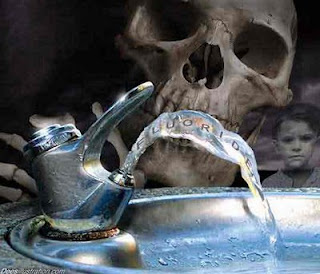 ... Fluoride is listed in the handbook titled CLINICAL TOXICOLOGY OF COMMERCIAL PRODUCTS as more poisonous than lead and just slightly less poisonous than arsenic.

The first use of fluoridated drinking water occurred during World War II when the German pharmaceutical giant, I.G. Farben, utilized it in Nazi prison camps such as Auschwitz in order to force the inmates into a compliant submission.

In 1944, Oscar Ewing became the head of the U.S. Federal Security Agency where he began a campaign to add fluoride to public drinking water. Prior to that, Ewing had been an employee of Alcoa, which controls the global aluminum cartel. Soon, aluminum waste material became a profitable business venture, at a 20,000 percent markup.

According to APPLIED CHEMISTRY, SECOND EDITION by William R. Stine, the fluoride ion in drinking water is responsible for a defective dental condition called mottled enamel. Also known as dental fluorosis, this defect results from disturbance by fluoride of the enamel forming cells during tooth formation and is one of the first signs of chronic fluoride poisoning. ...