"John Negroponte was ambassador to Honduras from 1981-1985. As such he supported and carried out a US-sponsored policy of violations to human rights and international law. Among other things he supervised the creation of the El Aguacate air base, where the US trained Nicaraguan Contras during the 1980's. The base was used as a secret detention and torture center, in August 2001 excavations at the base discovered the first of the corpses of the 185 people, including two Americans, who are thought to have been killed and buried at this base. During his ambassadorship, human rights violations in Honduras became systematic. The infamous Battalion 316, trained by the CIA and Argentine military, kidnaped, tortured and killed hundreds of people. Negroponte knew about these human rights violations and yet continued to collaborate with them, while lying to Congress. ... "
http://www.derechos.org/nizkor/negroponte/eng.html 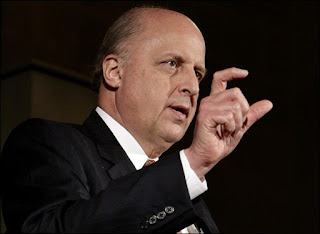 “John Negroponte has earned a reputation as one of America’s finest strategic thinkers and most dedicated public servants,” said Dan Mongeon, president and CEO of Agility DGS. “In four decades as a diplomat and civil servant, John was frequently singled out for the most difficult and sensitive assignments. He brings insight and integrity, and Agility DGS is thrilled to have him join us.”

"I am delighted to be joining the board of Agility DGS, a name synonymous with the finest support for U.S. and allied defense establishments around the world,” Negroponte said.

Negroponte served as U.S. ambassador to Honduras, Mexico, the Philippines, the United Nations and Iraq. He also held positions on the National Security Council, served as deputy national security advisor to President Ronald Reagan, and was the nation’s first director of national intelligence.

Negroponte’s most recent position in government was as deputy secretary of state, where he served as the State Department’s chief operating officer. He has twice received the State Department’s highest honor, the Distinguished Service Medal. President George W. Bush awarded Negroponte the National Security Medal for his outstanding contributions to U.S. national security.

http://www.businesswire.com/portal/site/google/?ndmViewId=news_view&newsId=20090714005975&newsLang=en
Posted by Alex Constantine at 6:21 AM