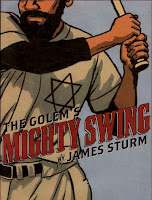 A belated follow-up to my post a while back on the world's strangest baseball game, the one between the Hebrew All-Star Nines and the Ku Klux Klan. Goldblog Special Baseball Correspondent Joshua Miller looked into the game further and found that one of its more curious aspects -- could the "Povich" listed on the Hebrew squad as playing right-field have been the great sportswriter (and father of Maury) Shirley Povich? -- has a most interesting answer. It turned out that this particular Povich was Shirley's brother, Abe. But more on him in a second.

It also turns out that the September, 1926 game between the Hebrews and the Klan wasn't the only time Abe Povich played against an anti-Semitic group. Larry Povich, one of Abe's sons, reports that he was often told about a game against a group of racists that the Hebrews actually won. After the last out, the opposing team turned serious and the Hebrews -- especially Abe's friend and teammate, Vinney the catcher -- began to worry. "They felt that they were in trouble because he said [the racists] had picked up their bats at, what they thought was, an inappropriate time. And they were coming after them," Larry said. Turns out the white supremacists were sore losers. 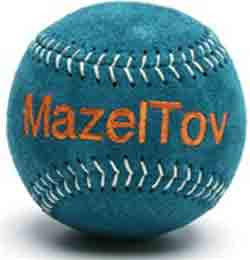 "It's very vivid in my mind in terms of how I imagine Vinney getting in this old truck, firing it up as they had to do in those days, and driving across a field on the mall, not too far from the Lincoln Memorial," Larry recalled. "The story that stuck in my mind was dad running across the infield towards the outfield and Vinney sweeping through the field picking up the Jewish guys -- dad and the other players on their team -- who were being chased the racists."

His family remembers Abe, who died in 1991, as an extraordinary athlete from an early age. He was an all-state player in high school in baseball, basketball and football, even though he only stood 5'3". When he moved to Washington, D.C., as a young man in the early 1920s, he joined a number of club teams and was a huge baseball enthusiast. "He often went to spring training with Uncle Shirley," Larry remembered, "and mom didn't expect to see him until after spring training." Beyond being remembered as a great athlete, Abe's family recalled him as a very good man. "My father was an expansive, magnanimous person who was always willing to help somebody out," Ron Povich, Abe's other son, said.

But his athleticism was one of his defining characteristics. Even after he lost his youthful ability to play football and baseball, Ron said, he was still an expert sportsman, bowling and playing golf long into his retirement. "It was legendary that he was such a fine athlete," Maury Povich said. "And my father Shirley insisted, even after watching Babe Ruth and Lou Gehrig and Sammy Baugh, and all the great athletes for 75 years, that the best athlete he ever saw was his brother Abe."