Note the John Birch Society's enduring embrace of Ron Paul - anyone on the left who fell for Paul's rhetoric in the past electoral round needs to admit complete ignorance, stop lecturing anyone, start from scratch, realize that democracy is not about speeches (Hitler made popular speeches, too, so don't listen to what they say, watch what they do), learn something about fascist poseurs adopting anti-establishment positions to gain a foothold in high office, stop taking pride in knowing anything about politics, wear a "dupe" pin and go to work for the circle-jerk national socialists at the Birch Society. If I have any "followers" who supported Ron Paul for president, I cordially invite them to fall off my sidebar and kindly drop into the seventh circle of Hell where dupes of crypto-fascism congregate to scare each other with histrionics over the evils of the Federal Reserve, collectivism, dialecticism, the dreaded "Illuminati," socialized medicine, and while away the day with brown-skin scapegoating. Please don't come back. 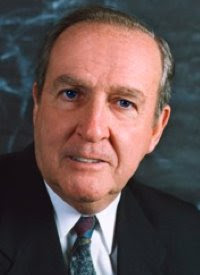 John Birch Society President John F. McManus brought a level of optimism to the freedom fight when he told the Fox News Network’s Senior Judicial Analyst Andrew Napolitano July 1 that restoring freedom through pressure on the U.S. House of Representatives is “doable.”

The exchange happened on “Freedom Watch,” an Internet program broadcast from FoxNews.com. It features former New Jersey Superior Court Judge Andrew Napolitano as a host who interviews significant persons in the freedom movement every Wednesday at 2:00 p.m. Eastern time.

The two men, joined by Columbia University Professor David Buckner, went on to have the following discussion:

McManus: We take the country back through the House of Representatives.

Napolitano: When you say 220 Mr. Smiths, you mean people like John McManus is describing you are going to have to win a majority of the seats in the House.

McManus: Here’s my point. If you get 10, 12, 15, 18 types like Ron Paul in the House of Representatives, a lot of the fence sitters will say, “Hey, I better move over this way. I better start following these views.” That’s reasonable and that’s doable.

http://www.thenewamerican.com/index.php/culture/education/1330
Posted by Alex Constantine at 8:03 AM