"Agent Orange and Dioxins: The Most Destructive, Poisonous Substances Ever Found"

"Conservatives" of the '70s had a good laugh at the "scare-mongering" liberals who claimed that Agent Orange was a destructive poison. Spokemen for the American Enterprise Institute, a CIA/military intelligence propaganda front, offered to drink it to prove the defoliant harmless, but of course they chickened out. My uncle fought in Vietnam and was exposed to the poison - he had cancer in his early fifties, and a major heart by-pass. A friend of mine from Arkansas was blinded in 'Nam. The Pentagon fought his disability claim for decades, claiming that Agent Orange is basically harmless. The lesson here is never ever listen to conventional "conservative" wisdom ... - AC 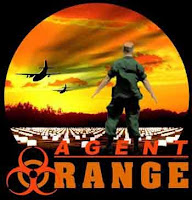 One of our reader/correspondents, Chuck Palazzo, just brought to our attention that Agent Orange, actually DIOXINS, have been re-discovered to cause all sorts of damage to humans.

(MOLALLA, Ore.) - I believe I had the first human DDT insecticide poisoning case in the US in about 1952. The patient was a “cropduster” pilot spraying mosquito swamps in Portland, Oregon. He filled the sprayer tanks with DDT in oil with 5 gallon cans and spilled it all over himself. He was advised by the salesman that it would kill mosquitoes like crazy but wouldn’t hurt him. After one summer of exposure he never recovered.

At that time, I was a newly minted toxicologist and was very cognizant of the extreme dangers of Chloroform and similar chlorinated anesthetics and their severe liver toxicity if used more than a few times. I also had some of the first 2-4-D, 2-4-5-T (in Agent Orange) chlorinated weed killer poison cases. I came to the conclusion that ALL chlorinated organic pesticides were lethally toxic to humans, other animals and birds.

DDT almost wiped out the American Eagle and many other birds including Condors.

This is about the time Rachel Carsons book Silent Spring came out [reporting] that pesticides were killing ALL sorts of wildlife. We were both scoffed at. How could weed killers and bug killers hurt humans?

About 1970, the U.S. was spraying Agent Orange, Agent White and Agent Blue all over Vietnam and American Infantry Soldiers were getting poisoned in large numbers. The Army and VA doctors were told that the soldiers’ illnesses were caused by SMOKING BAD MARIJUANA and they would get over it when they got home and quit smoking pot.

It didn’t turnout that way. DIOXINS are the extreme poisons in many chlorinated pesticides.

The Dioxins combine with DNA/RNA which are the building blocks for most functions in metabolism.

The [damage] includes Heart Disease, Parkinsonism, Diabetes, etcetera. Dioxins are already known to produce serious birth defects and a variety of cancers. Because of the extremely high reactivity of the DIOXINS, which are poisonous in parts per billion, and not the herbicides, it is surprising that many of these DIOXIN-contaminated pesticides are still in use.

The strange thing is that many are banned in the U.S. but are still manufactured here and sold in Third World Countries and causing the same problems.

While serving, he was exposed to Agent Orange, an herbicide used by the U.S. military during the war to remove leaves and plant life that provided cover for the enemy. Since then, Poe has been dealing with organ damage.

According to the U.S. Department of Veterans Affairs, approximately 20 million gallons of herbicides were used in Vietnam between 1962 and 1971, and that shortly following their military service in Vietnam, some veterans reported a variety of health problems and concerns, which some of them attributed to exposure to Agent Orange or other herbicides.

Now, at 58, he is confined to a wheelchair and must use an oxygen tank. He has only one artery pumping blood from the heart and that is 70 percent blocked.

“It’s only pumping 30 percent of blood to his whole body,” said Mike Chenette, who says Poe, a Carrollton resident, is like a dad to him. “In the last three years, his heart actually just started dying. The doctors came out and told us here just a few months ago they can’t do no more for him, to go ahead and make his funeral arrangements.”

It hasn’t always been like this. Poe used to own a car-crushing business. Chenette worked for him probably seven or eight years ago, when times were still good. Chenette met him at an auction where Poe was buying toys and gifts.

“He was one of those people buying a bunch of stuff and donating it to a bunch of kids at Christmas time,” Chenette said. “He was one of these people, you know, it didn’t matter what was going on in his life, he donated things or gave to other people besides himself.”

Chenette didn’t know how sick Poe was then, but he’s watched him deteriorate over the years and it’s been hard to see, particularly because they became very close and consider themselves family. It was easy to forget the health issues until one day at work.

“While I was working with him one day he had a massive heart attack and I had to rush him to the hospital,” he said.

Suddenly the health problems came on with a vengeance and for the last two years, Poe has been unable to work.

One of the most difficult things Poe has had to give up because of his illness is road trips with his wife. His Harley Davidson Heritage Softail is parked in his garage, just waiting, but he can no longer use it. Poe’s final request is for one last road trip to the mountains with his wife, Dottie, said Jennifer Albright, a member of the local Iron Order Motorcycle Club.

“He loves the mountains and he loves it up there,” Albright said. “I had gotten with Pigeon Forge, the Chamber of Commerce up there, and they have donated a lot of stuff. The Comedy Barn up there donated tickets, two free passes, The Miracle Show Theater they donated a VIP attraction pack for them. We are going to get them a hotel, and we’re trying to get together a ride to take them up there in a convertible.”

A convertible may not be a motorcycle, but he can still feel the wind on his face for the trip.

All Poe’s family and friends have rallied around him. Though he hasn’t been able to work for two years, he’s been denied medical disability by Social Security. He and his wife survive on his veteran’s disability checks. The Veterans Administration hospital takes care of most of his medical work, but still the bills have added up.

“He’s the type of person, he’s not going to ask anybody for help, because he thinks other people (are) important than he is,” Chenette said. “To me he is a very important person in my life and anybody else’s life that’s ever met him or got to know him. Everybody just loves the man to death.”

So, he hatched the idea for a motorcycle benefit. He contacted Albright at the Iron Order Motorcycle Club, and the two began planning.

The benefit, a motorcycle ride, is today at Southern Steel Cycles in Carrollton. Registration begins at 8:30 a.m., kickstands up at 10 a.m. Kroger is providing food. There will be a raffle for a Stoeger M2000 Automatic 12 gauge shotgun. Dozens of area businesses have donated gifts and prizes for the event as well as tents to host it.

“We really felt it was important to try and do something to help him,” Yearta said. “When he was working and making good money, he always gave a lot to charities and buy toys for kids, and really just gave a lot back to people who needed it.”

Now Yearta can finally give back.