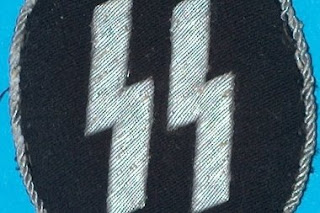 Neo-Nazi Neil Lewington had "chilling" ambitions of forming a racist hit squad along the lines of Hitler's Waffen SS. Calling itself the Waffen SS UK, he envisaged teams working in twos to plant bombs all over Britain.

His plans were found in a hand-written manual called Waffen SS UK Members Handbook, discovered in his bedroom. After defining terrorism and the law, he set out his "statement from the command council". It said: "A new group has been formed, the Waffen SS UK. We have 30 members split into 15 two-man cells. We are highly trained ex-military personnel and will use incendiary and explosive devices throughout the UK at random until all non-British people as defined by blood are removed from our country. This is no joke. In this country the most serious domestic terrorist threat is the Alf (Animal Liberation Front), start rewriting the books? Finally our motto: You cannot stop what can't be stopped."

Brian Altman QC told the jury: "You may conclude that this was a chilling mission statement, a statement of intention by this defendant, one he took very seriously and, quite clearly, an intention he had begun to put into effect."

During the war, the feared Waffen SS acted as the Nazi party's combat section and ran death camps in which millions of people were murdered. Counter-terrorism police found nothing to suggest the existence of a UK group following Lewington's arrest.

Although he had sympathies for fascist groups, there was no proof that he was a member of any organisation.

A source said: "The SS handbook, this was something he was planning - or at the very least gives an insight into his mind.

"He was a nobody who thought this would make him a somebody."

http://www.24dash.com/news/Communities/2009-07-15-Neo-Nazi-had-chilling-plans-to-form-racist-hit-squad
Posted by Alex Constantine at 11:47 AM

There are nuts of all varieties, but people like this are often created, encouraged then paraded by the state to be used to garner support for more freedom grabbing.

Since people aren't afraid of "Islamic terror" any more, govt needs a new (fictitious) threat to hold over us, and this will fit the bill nicely.

These neo-Nazi losers (whose threats are as fake as those of 'Al-Qaeda') will be used to bring down opposition to the ever-increasing government tyranny, just like now when someone says 'militia', everyone thinks of racists, Timothy McVeigh and pipe bombs. Guilt by association. Can you believe some people are afraid of militias, but government is attacking them from all sides and they don't even know/care?