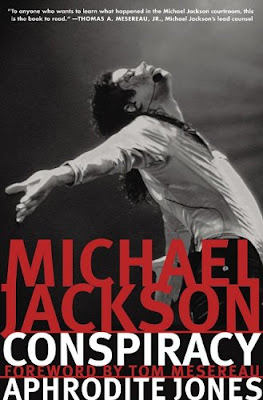 Her views have changed over time, however:

" ... At a dinner house in March of 2006 on Ventura Blvd and Coldwater Canyon Blvd here in The San Fernando Valley, Aphrodite Jones told me POINT-BLANK, and emphatically stated that Michael Jackson was GUILTY of child molestation. ... "
http://pererro.blogspot.com/2007/06/aphrodite-jones-and-some-of-michael.html

Ms Jones, according to the San Ferndando witness, was "emphatic" about Jackson's guilt "in March of 2006." But as Jones herself tells it, she reversed her position earlier, in June 2005, when she "made her last appearance on The O’Reilly Factor related to the Michael Jackson trial," and "experienced a striking moment of clarity." A revelation: 'As I made one of my last public comments on the case,' she remembers, 'I realized that I had become one of the media bunch who had predetermined the outcome of the trial, wrongly."
http://www.aphroditejones.com/books/Michael_Jackson.htm

So, after making multiple appearances on Fox News to argue Jackson's guilt, she is now equally emphatic in her belief that Jackson was innocent. Yet the book, she acknowledges, is a "conspiracy theory." So her confidence in her own book does not lead her to describe it as an airtight examination of Jackson's guilt or innocence - it's a "theory."

Who was behind the "conspiracy?" The media: "Throughout the trial ... the media found that it paid in ratings to serve extra helpings of snide remarks, smirks, and condemnation in their press reports." The condemnation here is seen as a deliberate strategy to boost ratings. No evidence for this startling revelation is offered. It's a "conspiracy theory."

Jones: "Our observations of Michael Jackson have become tainted. The actions of the media, if not explicitly intended, had the effect of deceiving us into believing that Michael Jackson was now 'really' wierd." Jones expects us to believe that the common perception of Jackson as a strange character originated with the press, not Jackson himself ... perhaps someone, somewhere, will believe that Jackson was well-balanced, a picture of mental health - someone on prescription drugs with a hundred face lifts in his or her past and children who drink alcohol. Someone with a hole for a nose, a Caucasian African-American with longstanding Mafia ties and a feminine speaking voice. Personally, I'd say that Jackson had fairly obvious issues, but perhaps the press has "tainted" my perceptions. Richard Nixon said he had the same problem ...

Jones's "theory" continues: The media - recall that she'd been on Fox News several times fuelling the lynch mob, so this is an indictment of herself ... Aphrodite, per her own criteria, was a News Corp. "conspirator" - was "carried away in reporting salacious and tantalizing news about Michael Jackson," and this had a "desensitizing" effect on our very perceptions: "A pop star which the American public had become enamored with had now evolved in our minds into someone unsavory."

Jones wrote this before Jackson died: "Even at the end of the day, in the lead-up to the announcement of the 'NOT GUILTY' verdicts on June 13, 2005, the media were still predicting doom and gloom for the King of Pop." And the press was correct. Death and despair were in the cards. But Jones sees in this prophetic point of view further evidence of "conspiracy."

But unlike most conspiracies, this one was overt. "There was no secret about what the media was doing."

But it wasn't just the press. Jones: "[Santa Barbara DA] Tom Sneddon brought a criminal trial against Michael Jackson because he's a publicity hound; he just wanted the whole world to be watching him."

How does Aphrodite Jones know Sneddon's deepest "ulterior" motives? Is she a psychic? In a blurb for the book, she boasts that she gets "inside the minds" of the central participants in the trial. Is that possible? Is that what a professional, unbiased reporter does?

Sneddon "just wanted the whole world to be watching him. If Sneddon won, and to try to assure this, Sneddon threw in every charge he could think of including the ridiculous conspiracy charges, then Sneddon's name would be up in lights in legal circles around the world." Jones states all of this as fact, not idle supposition, but might be hard-put to prove it. It may be true, maybe not - I don't know and don't pretend to know. Neither does Ms Jones.

Her psychic approach to journalism is plied elsewhere. When asked in an interview why Jackson agreed to a $20 million settlement in 1993, it was supposedly not an admission of guilt. Ms. Jones responds: "MJ was worth $200M at the time - and was ready to be worth double and triple that. So '$20M seemed like not much $ (at least to greedy advisors who just wanted MJ to work and get paid for doing music and not bother with lawsuits!"

Anyone who believes this explanation is as biased and psychic as Jones. Jackson didn't cry blackmail, as any innocent person would have done. He didn't contact the police himself to demand an investigation of the alleged extortion.

He paid the "modest sum" of $20 million, only a tenth of his net worth, to silence his accusers (not an original argument).

The media haven't persuaded me that this is so. Jones may be capable of reaching into anyone's mind and extracting one's true, unsavory motives - but her journalistic methods are quackery and not on par with her "psychic" gifts or inane "conspiracy theorizing." In the book, she does make a decent point or two - the media, including herself on Fox, DID go to far - doesn't it always? The recording industry DOES devour its own talent. But why no mention of Jackson's organized crime connections? Why no mention of his shady associates, occultism, anti-Semitism, ties to Scientology, dubious accusations of conspiracy levelled against Mitollo and Sony, his evident mental decline?

Because those acknowledgements would lead us away from the premise that Jackson was an innocent, abused genius, and the book is nothing if not leading.

And Aphrodite Jones was in the midst of it, an informed reporter on the O'Reilly Factor, adding her pre-revelatory two cents, "tainting" our perceptions, conspiring against Jackson. She was at the core of the media "conspiracy," and so much of the book's criticism of the Fifth Estate is ultimately about herself, though she often seems to forget this fact.

She was one of the ranking conspirators ... but doesn't let us in on her own illicit motives. Was it profit, as she has maintained categorically of the "conspirators?" And what is her motive now?
Posted by Alex Constantine at 12:03 PM