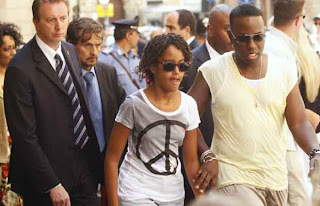 "A typical street whore." "A bunch of ghetto thugs." "Ghetto street trash." "Wonder when she will get her first abortion."

These are a small selection of some of the racially-charged comments posted to the conservative 'Free Republic' blog Thursday, aimed at U.S. President Barack Obama's 11-year-old daughter Malia after she was photographed wearing a t-shirt with a peace sign on the front.

The thread was accompanied by a photo of Michelle Obama speaking to Malia that featured the caption, "To entertain her daughter, Michelle Obama loves to make monkey sounds."

Though this may sound like the sort of thing one might read on an Aryan Nation or white power website, they actually appeared on what is commonly considered one of the prime online locations for U.S. Conservative grassroots political discussion and organizing - and for a short time, the comments seemed to have the okay of site administrators. ...