wHAT iS cONSERVATISM? - Bush Administration Study Exlains the Psychological Roots of Republican "Principles" 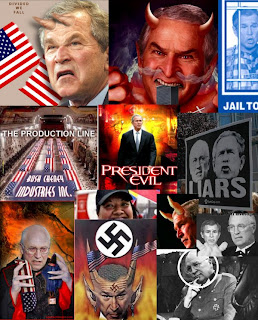 A study funded by the US government has concluded that conservatism can be explained psychologically as a set of neuroses rooted in "fear and aggression, dogmatism and the intolerance of ambiguity".

As if that was not enough to get Republican blood boiling, the report's four authors linked Hitler, Mussolini, Ronald Reagan and the rightwing talkshow host, Rush Limbaugh, arguing they all suffered from the same affliction.

All of them "preached a return to an idealised past and condoned inequality".

Republicans are demanding to know why the psychologists behind the report, Political Conservatism as Motivated Social Cognition, received $1.2m in public funds for their research from the National Science Foundation and the National Institutes of Health.

The authors also peer into the psyche of President George Bush, who turns out to be a textbook case. The telltale signs are his preference for moral certainty and frequently expressed dislike of nuance.

"This intolerance of ambiguity can lead people to cling to the familiar, to arrive at premature conclusions, and to impose simplistic cliches and stereotypes," the authors argue in the Psychological Bulletin.

One of the psychologists behind the study, Jack Glaser, said the aversion to shades of grey and the need for "closure" could explain the fact that the Bush administration ignored intelligence that contradicted its beliefs about Iraq's weapons of mass destruction.

The authors, presumably aware of the outrage they were likely to trigger, added a disclaimer that their study "does not mean that conservatism is pathological or that conservative beliefs are necessarily false".

Another author, Arie Kruglanski, of the University of Maryland, said he had received hate mail since the article was published, but he insisted that the study "is not critical of conservatives at all". "The variables we talk about are general human dimensions," he said. "These are the same dimensions that contribute to loyalty and commitment to the group. Liberals might be less intolerant of ambiguity, but they may be less decisive, less committed, less loyal."

But what drives the psychologists? George Will, a Washington Post columnist who has long suffered from ingrained conservatism, noted, tartly: "The professors have ideas; the rest of us have emanations of our psychological needs and neuroses."