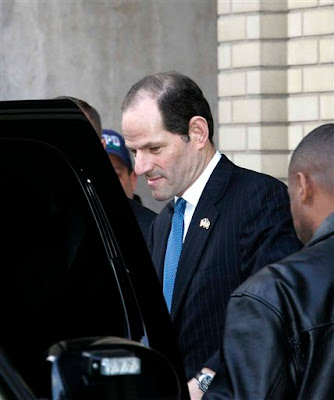 
Federal investigators have developed information that the prostitute whom Eliot Spitzer is said to have met in Washington last month has some relationship with a man who the authorities contend is an associate of organized crime, according to people with knowledge of the matter.

It was unclear on Friday whether the investigators had determined the precise nature, or timing, of the relationship between the 22-year-old woman and the reputed organized crime figure, Anthony Scibelli, 37, a building contractor now under federal indictment in a separate case in Brooklyn.

But prosecutors and F.B.I. agents involved in the prostitution case have begun asking questions about whether anyone involved with the ring that the former governor is believed to have patronized, the Emperor’s Club V.I.P., understands how Mr. Scibelli knows the woman, Ashley Alexandra Dupré, according to a person with knowledge of the investigation.

A lawyer for Mr. Scibelli acknowledged that his client knew Ms. Dupré but said that the two did not have a sexual relationship.

“He doesn’t deny knowing her, but he does deny having any illicit relationship with her,” said the lawyer, Gerald L. Shargel. “Anthony Scibelli is a hard-working contractor. He is not a mob member. He is not a mobster. He is someone who goes to work every day.”

Mr. Shargel said his client’s only contact with Ms. Dupré, an aspiring rhythm and blues singer, was related to his efforts to further her music career. “He has contacts in the music business,” Mr. Shargel said. “She was introduced to him because of his contacts in the music business, and she obviously thought that he could help further her career, and that was the sole basis of the relationship.”

He said the two met through a mutual friend whom he did not identify.

But the fact that the scope of Ms. Dupré’s contacts included someone the federal government lists as an organized crime associate underscores the dangerously vulnerable position Mr. Spitzer put himself in if he consorted with prostitutes.

A spokeswoman for Mr. Spitzer, Brandy Bergman, said the former governor had no comment, as did a spokeswoman for federal prosecutors in Manhattan. A lawyer for Ms. Dupré, Don D. Buchwald, also declined to comment. Ms. Dupré did not respond to messages.

Mr. Scibelli is listed as the owner of one construction company and as an executive in another that does business in the New York metropolitan region. He served a state prison sentence in the early 1990s for felony drug sale, according to state prison records.

Last month, he was one of 62 people charged in a sweeping indictment brought by federal prosecutors against the Gambino crime family, including 3 reputed leaders of the family, 6 reputed capos, 16 men the authorities classified as soldiers and others, like Mr. Scibelli, whom the government identified as mob associates.

Specifically, the government accused Mr. Scibelli of extortion and extortion conspiracy, claiming he shook down another contractor and took over the man’s portable cement plant.

He was charged along with three other men, Nicholas Corozzo and Leonard DiMaria, identified in the indictment as Gambino captains, and Mr. Corozzo’s son-in-law, Vincent Dragonetti, a reputed soldier who is involved in a construction business with Mr. Scibelli.

Mr. Shargel noted that Mr. Scibelli was not charged with racketeering conspiracy in the Brooklyn case, as were 25 of the other defendants. And he was named in just two of the 80 counts in the 170-page indictment.

He is now free on $1 million bond that was secured by the house where he lives with his wife in Medford, N.Y., and a home there owned by his parents.

Mr. Scibelli also has another company, VMS Consulting Inc., which is based at his home in Medford, according to business records.

Hunter-Atlantic was involved in shoring up a landmark six-story cast-iron building adjacent to the planned site of a 20-story condominium building called 57 Reade Street in TriBeCa. The city’s Buildings Department halted work there in November after the excavation for the new building left the landmark listing.