Who is Rick Davis?

Davis, Then a Lobbyist, Has Spurred Debate in Reform-Focused Campaign
By Jeffrey H. Birnbaum and John Solomon
Washington Post
January 25, 2008; A01

A top political adviser in Sen. John McCain's presidential campaign helped arrange an introduction in 2006 between McCain and a Russian billionaire whose suspected links to anti-democratic and organized-crime figures are so controversial that the U.S. government revoked his visa.

Rick Davis, who is now McCain's campaign manager, helped set up the encounter between McCain and Russian aluminum magnate Oleg Deripaska in Switzerland during an international economic conference. At the time, Davis was working for a lobbying firm and seeking to do business with the billionaire.

There is no evidence that McCain did anything for Deripaska after they met at a social gathering over drinks and dinner. Deripaska was grateful for the introduction, writing a thank-you note to Davis and his partner and offering to assist them in a subsequent business deal, according to a copy of the note obtained by The Washington Post.

With a net worth of more than $13 billion, Deripaska is one of the richest men in Russia and a close ally of President Vladimir Putin. McCain has been one of Putin's sharpest U.S. critics, calling for Russia to be kicked out of the Group of Eight industrialized nations because of Putin's anti-democratic activities. The Arizona Republican has also repeatedly complained about the negative impact of Kremlin-linked oligarchs such as Deripaska.

When Deripaska met McCain, Davis was part of Davis Manafort, a lobbying firm that was being paid to provide political advice to pro-Russian and oligarch-funded candidates in Ukraine, according to interviews and news accounts. At the same time, McCain was publicly supporting those candidates' Western-oriented democratic rivals.

The socializing with Deripaska provides a case study in the challenges faced by McCain, a longtime foe of Washington lobbyists who has a well-known lobbyist as his top political aide. Davis, who has been a political adviser to McCain on and off since 1999, was part of a lobbying firm that worked not only for Ukrainian politicians but also for telecommunications firms, a lottery services provider and freight companies.

Mark Salter, a spokesman for McCain, said that meetings with Deripaska took place during official trips abroad by senators and that McCain did nothing improper. "Any contact between Mr. Deripaska and the senator was social and incidental," he added.

Salter said the contact between McCain and Deripaska did not constitute a "private meeting"; both men were part of larger gatherings.

Davis declined to comment, saying by e-mail that his activities regarding Deripaska "all relate to my private business and have nothing to do with Senator John McCain."

Within the campaign, Davis's role has been controversial from the start, as some aides in late 2006 argued to McCain that the Davis firm's work overseas conflicted with the senator's record as a pro-democracy champion and an advocate of reducing the influence of lobbyists in Washington, according to two people familiar with the conversations. The sources spoke on the condition of anonymity because of the sensitivity of internal campaign conversations. The aides questioned whether Davis should be given an important title in the campaign because that would make him more vulnerable to criticism, the sources said.

At first, McCain agreed to give Davis a less conspicuous title, one of the sources said. But then, the source added, "a few days later he [McCain] came back and said he had changed his mind."

Salter strongly disagreed with that recounting. "No one suggested Rick shouldn't be in the campaign or discussed such a thing with the senator," he said in an e-mail. 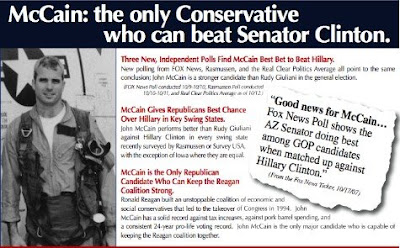 Last summer, a power struggle broke out in the McCain campaign after it ran short of money. Many staffers were dismissed, but Davis survived the purge.

The work of Davis's firm put him on the opposite side of Eastern European politics from McCain, who has spoken out vigorously against what he sees as Putin's attempts to subvert elections in former Soviet republics such as Ukraine.

Davis's firm provided political advice to a pro-Russian party in Ukraine during the parliamentary elections of 2006. McCain, on the other hand, backed President Viktor Yushchenko, a Western-oriented reformer who led 2004's Orange Revolution, which overturned what he and his allies considered an election stolen by the party helped by Davis's firm. McCain visited Ukraine to boost Yushchenko after he won a new election and even nominated him for the Nobel Peace Prize.

Deripaska, 40, a former metals trader, is No. 40 on Forbes's billionaires list as owner of two-thirds of the world's largest aluminum producer. He has been accused of shady business practices in lawsuits in the United States and Britain, and his multiple-entry U.S. visa was yanked by the State Department in the summer of 2006.

One source familiar with the decision said it was made because of concerns about Deripaska's business dealings in Russia.

The Wall Street Journal has linked Deripaska's entry ban to concerns that he might have ties to organized crime in Russia, but Deripaska has denied any such links. "He's not the nicest in terms of law abidance," said Anders Aslund, a Russian expert at the Peterson Institute for International Economics, based in Washington. "But he is by no means among the worst."

E-mails to Deripaska's office asking about his meetings with McCain went unanswered. His attorney in Washington declined to comment, as did a spokesman for Deripaska in London.

The first gathering that brought McCain and Deripaska together occurred in January 2006, when McCain was part of a congressional delegation trip. He and a small group of senators, including Saxby Chambliss (R-Ga.) and John E. Sununu (R-N.H.), met for a drink near Davos, Switzerland, at an apartment where they were greeted by Davis and Deripaska. The group then went to a dinner at the ski chalet of Peter Munk, founder of Barrick Gold, the world's largest gold-mining company, based in Toronto. Participants at the buffet dinner said Munk complimented his sometime business partner Deripaska during his brief remarks to the 40 or so guests.

Later that month, Deripaska wrote to Davis and his partner, GOP political consultant Paul J. Manafort, to thank them for arranging the meeting. "Thank you so much for setting up everything in Klosters so spectacularly," he wrote. "It was very interesting to meet Senators McCain, Chambliss and Sununu in such an intimate setting."

The letter went on to mention a business deal that Deripaska and the consultants had apparently been talking about. "Please will you send me the information on the metals trading company we discussed and would be happy to see if I can do anything to help," Deripaska wrote.

The letter was sent to Davis at the Reform Institute, a Virginia-based nonprofit group that McCain helped start to promote many of his trademark reform efforts, including increasing the transparency of lobbying and campaign financing.

Seven months later, in August 2006, Davis was present again at a social gathering that was also attended by McCain and Deripaska, this time in Montenegro, another Eastern European country in which Davis's firm was working. The three were among a few dozen people dining at a restaurant during an official Senate trip.

Davis was a paid consultant to the governing party in Montenegro and had advised it on a just-ratified independence referendum, Salter said. That was why he was at the dinner, he added.

Afterward, a group from the dinner took boats out to a nearby yacht moored in the Adriatic Sea, where champagne and pastries were served, partly in honor of McCain's 70th birthday.

Salter said neither McCain nor Davis recalls Deripaska being on the yacht after dinner.

"The Montenegro government handled all arrangements with the codel, including invitations for the dinner," Salter said in an e-mail, using a term for "congressional delegation." "Rick was not involved in making dinner plans for either the government or the codel." He added: "I assume the government invited him [Deripaska] because he is reportedly the largest single employer in the country."

In Switzerland, Davis was "an invited guest at the World Economic Summit at Davos and was not traveling with or serving in a capacity as staff to the senator," Salter said.