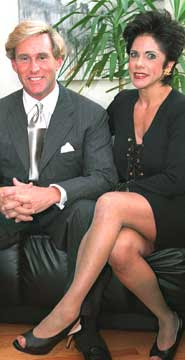 A Republican political consultant said on Sunday that his lawyers wrote a letter to the F.B.I. in November stating that Gov. Eliot Spitzer had patronized high-priced prostitutes during trips to Florida.

But the consultant, Roger J. Stone Jr., said he did not know whether the letter played any role in helping investigators link Mr. Spitzer to a prostitution ring.

An affidavit filed in federal court in Manhattan in the prostitution case said that agents from the Federal Bureau of Investigation and the I.R.S. began investigating the prostitution ring, the Emperor’s Club V.I.P., in October as part of an inquiry of Mr. Spitzer that began last summer when a bank reported what seemed to be suspicious transactions involving Mr. Spitzer.

Mr. Stone, who has referred to politics as “performance art,” is a longtime Republican consultant known for hardball politics and a cloak-and-dagger sensibility. He started out as a teenager in the campaign of Richard M. Nixon, and has a tattoo of the former president’s head on his back.

Mr. Stone was fired as a consultant to New York State Senate Republicans last summer after allegations arose that he had left a threatening voice mail message for Mr. Spitzer’s father, Bernard. Mr. Stone has denied making the call.

In a series of e-mail messages on Sunday, Mr. Stone said his lawyers were contacted by federal investigators three weeks after the allegations about the call surfaced.

He said that he was never interviewed by federal officials and that he was not sure his lawyers were contacted because of the reported call to Bernard Spitzer.

Mr. Stone said he told his lawyers to send the letter in November accusing Mr. Spitzer of using prostitutes after meeting a woman at an adult club in Florida who told him she had knowledge of Mr. Spitzer’s alleged assignation.

According to law enforcement officials briefed on the case, federal agents stumbled upon the prostitution ring after they began an investigation of Mr. Spitzer, one initially focused on possible political corruption.

James Margolin, a spokesman for the New York F.B.I. office, would not comment on whether the bureau received Mr. Stone’s letter. The Miami Herald reported on Mr. Stone’s letter to the F.B.I. on its Web site on Friday.

Since the story about Mr. Spitzer’s connection to the prostitution ring broke on March 10, rumors have been proliferating on the Web and in Democratic circles that the case was motivated by politics. Law enforcement officials have maintained that the case was prompted by suspicious banking transactions. Mr. Spitzer resigned on March 12.

Mr. Stone, who divides his time between Miami Beach and Manhattan, said that he had no idea what the government knew at the time he sent the letter and that he had no knowledge of the timing, pace or focus of the federal investigation into Mr. Spitzer.

A transcript of the letter published in The Herald said that Mr. Spitzer “used the services of high-priced call-girls” in Florida and “paid literally tens of thousands of dollars for these services.” A spokesman for the Spitzers declined to comment on Sunday.

The letter says that Mr. Spitzer paid for the service of prostitutes in Florida “not with credit cards or cash, but through some prearranged transfer.” It also says that Mr. Stone obtained the information from “a social contact in an adult-themed club.”

On Sunday, Mr. Stone called it “ironic that Spitzer would go down for something as silly as sex.”

“Spitzer held himself out as a model of rectitude, as morally superior, and prosecuted escort services while patronizing one,” he said. “This is really about hypocrisy and not sex.”

He added, “I am not one to criticize anyone else’s sexual habits, and I have never held myself out as a ‘family values’ Republican.”

The call that Mr. Stone was accused of making was an invective-laced tirade that threatened to compel the elder Mr. Spitzer to explain under oath the “shady campaign loans” he made to his son during Eliot Spitzer’s unsuccessful race for attorney general in 1994.

A report by a private investigative firm hired by Bernard Spitzer, Kroll Associates, pointed to Mr. Stone as the caller.