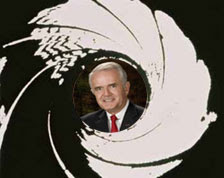 ALEXANDRIA, VA – A federal prosecutor from San Diego signaled yesterday that the government is considering bringing new charges, including an additional conspiracy allegation, against Kyle “Dusty” Foggo, the former No. 3 official in the CIA who became ensnared in the bribery scandal involving Randy “Duke” Cunningham.

During a brief status conference in federal district court in Alexandria, Assistant U.S. Attorney Phillip Halpern raised the possibility of seeking a new indictment against Foggo, a longtime friend of Brent Wilkes, who was convicted in November of bribery, fraud and money laundering. Foggo and Wilkes were implicated in the investigation that led to the imprisonment of Cunningham, a former Republican congressman from Rancho Santa Fe.

In addition to a broadened conspiracy case, Halpern suggested during the conference in front of U.S. District Judge James Cacheris that the new indictment could include conflict-of-interest charges and allegations of having made false statements. He indicated that Foggo could find himself facing a half-dozen new counts in addition to the existing 30 counts of fraud, conspiracy and money laundering.

Cacheris set a trial date of Nov. 3, a move that required Foggo to waive his constitutional right to a speedy trial.

Halpern and other prosecutors in the U.S. Attorney's Office in San Diego originally launched Foggo's prosecution in San Diego but subsequently agreed to defense motions to move the case to the Washington area.