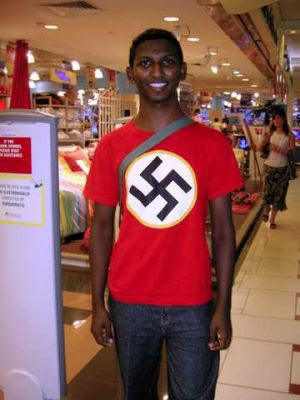 " ... I do not see joining up with the Brownshirts as something to be glossed over in order to make the greater point of opposing Chinese imperialism. In fact, it is precisely this mistake many make in romantic assertions of national identity in opposing any colonialism or imperialism. That way can lie a variety of fascist horrors. ... "

Dalai Lama a fake Buddhist
Letter to the Editor
shanghaidaily.com
By Arthur Buonamia 2008-3-19

I've been reading the reports about the violence in Tibet (the Tibet Autonomous Region). There is a widespread propaganda effort in the West to portray this fake Buddhist as a man of peace.

He is a fake, and wishes to return to a time of feudal class dominion over the people of Tibet.

Let's not forget that his first foreign friends were German Nazis, what can be expected. In the old days these malcontents would have been resettled 2,000 miles away.

They are fortunate. The present Chinese government is more than lenient.

Dalai Lama and the Nazi

I know two people who have met the Dalai Lama. One in conjunction with a medidation retreat and another in conjunction with academic work. I have also had tea with an Anglican bishop who described the Tibetan spiritual leader (somewhat dismissively) as "a nice guy". I wonder what they would think of the Dalai Lama's acknowledgment of Bruno Beger in light of a Telegraph book review:

Himmler's Crusade suffers from too many diversions, but is a wide-ranging book which offers a warning about the dangers of alternative history. The author might, however, have observed that the Dalai Lama's official website features a statement of support from Bruno Beger and others, together with a 1994 photograph showing the old Waffen-SS man standing at the Dalai Lama's right hand.

Himmler's Crusade describes a Nazi "anthropological" expedition to Tibet in the late '30s in support of some detail of Nazi racial mysticism. Beger was there to examine Tibetans for "Aryan" facial features. This would seem odd company for the peace-loving super-guru of Tibet. A check of the government of Tibet-in-exile's official website reveals Beger's name is signed to a press release of people testifying to Tibet's existence as a country independent of its current Chinese occupiers. The same letter is reproduced elsewhere at the website with a photo of the Dalai Lama standing with Bruno Beger and others.

The association is repulsive. The Tibetan government gains little from this letter and does so at the expense of recognizing the legitimacy of the Nazi government which sent Beger and the twisted work he was sent to do. The Telegraph piece misses at least one other name signed to the letter:

Heinrich Harrer. Harrer was an SS member who tutored the 14th Dalai Lama after escaping from British custody during the war. His prevarication on the subject of his SS membership merits publication by the Tibetan government but appears to omit some salient detail. Harrer became a member of the SA when it was still illegal to do so in Austria.

The $70-million film, scheduled to open Oct. 8, tells the story of Heinrich Harrer (Brad Pitt), an Austrian mountaineer who tutored the Dalai Lama during the 1940s and chronicled human rights abuses in Tibet. The German magazine Stern revealed in June that Harrer voluntarily became a Nazi storm trooper in 1933 and a sergeant in Hitler's elite SS five years later. The magazine also reported that Harrer gave proof that he and his bride-to-be were of Aryan lineage when asking SS leader Heinrich Himmler's permission to marry in 1938.

And then... I am watching Seven Years in Tibet, a film based on Harrer's autobiographical book of the same name. It is beautiful. Perhaps the most effective propaganda I have seen for the Tibetan government-in-exile.

Harrer acknowledges the error of his Nazi past though, much like the public statements I have seen at the Tibet website, not to the extent of interrupting the flow of his narrative. Or rather, his narrative as retold by Jean-Jacques Annaud's version which reveals Harrer's Nazi affiliations in a way the book reportedly does not. This is the issue which troubles me. I am glad Harrer came to some sort of spiritual enlightenment with the lamas. I imagine he is the only man to have met both the Fuhrer and the Dalai Lama, the moral poles of the 20th century. But I do not see joining up with the Brownshirts as something to be glossed over in order to make the greater point of opposing Chinese imperialism. In fact, it is precisely this mistake many make in romantic assertions of national identity in opposing any colonialism or imperialism. That way can lie a variety of fascist horrors. Harrer's character expresses contempt for a former friend well after the transformation of his charater that is the core of the story. "A man who betrays his culture should not lecture others in its practices." Or something very close to that effect. Those could be the words of a man appalled at the repeat of history in a Chinese/Tibetan anschluss. Or they could be the words of a man whose thinking is not so reformed from the mystic-nationalism which underlay his youthful embrace of the Austrian Nazi party. I do not know enough to say.

http://www.ghostofaflea.com/archives/000368.html
Posted by Alex Constantine at 12:28 AM